Kensei is the coolest man in in the world
He wears Texas Tuxedos without a trace of irony.
He’s on the cover of the local magazine.
His title says “Rock” Division on his business card.
He puts whiskey in his coke just for the flavor.
He runs the greatest bar in Japan, called Desolation Row. A great name, made better because inside you can hear anything ever sung by Bob Dylan, down to the bootlegs.
After all, Kensei is the coolest man in the world.
Desolation Row overflows with vinyl. If it rocks, Kensei’s got it. I’ve cheersed beers to more American classics than I’ve ever heard in bars in the states (no Lady Gaga for Kensei, ever.) His favorite (obviously I hope) is Bob Dylan, but I’ve listened to the Boss, Tom Waits, Muddy Waters, and my personal favorite, Earl Scruggs. That Kensei has Earl Scruggs is not unusual, but that he has my favorite record, The Kings of Bluegrass is what sets him apart from anywhere else I’ve ever been. And when my friend Alex asks to be the DJ and exclusively plays the Beetles and Bluegrass so the two of us can dance behind the bar while Kensei refills our Jack Daniels, Kensei does so with a smile and a nod of his head.
But its not just the drunken parties that make Desolation Row so great. The space itself is beautiful in a hole-in-the-wall kind of way. Most of Desolation Row is filled with the bar itself: a six inch slab of an ancient Japanese tree. Ask Kensei about it and you’ll find that though it weighs a ton, it traveled to Desolation Row from Kensei’s old bar, a herculean feat Kensei probably did with ease. Handmade shelves are crammed with vinyl and CDs. The back of the bar is a cozy space that features a Botsudan, a traditional Japanese shrine for dead ancestors, but don’t worry, Kensei got it purified before he got it put in his bar. You can normally find the tourists lucky enough to find their way down to Desolation Row clustered around it, because having something like that in a bar terrifies the locals.
The locals tend to crowd the bar and pick Kensei’s brain. Kensei knows all, from American Western movies to the best hidden bars in Kyoto, not that you’ll be able to find them, because you’re not as cool as Kensei.
Kensei is the coolest man in Japan.
This weekend I had the honor of seeing his personal library. Kensei mentioned it once and I’ve been hounding him since. HE agreed to take me on Sunday, even though we’d harassed him to opening his bar the night before and demanded free beer for having to wait. Still, Kensei met my wife and I near the city library, a place I would find had less than half of the English selection of Kensei’s collection. We strolled towards the temples in Takayama and found his library nestled above a babbling creek, hidden beneath beautiful maples on an ancient road once home to the famous carpenters of Takayama. He ushered us across his personal bridge with a laugh, then revealed the contents of his library.
The fact that I could only read a tenth of the books in no way took away from the experience, for his English selection would take years for me to read. Capote, Steinbeck, Toni Morrison, Joyce, King, Dickens, Austen, Wells, and more, all crammed together between thousands of Japanese books. I filled a bag, then topped it off with a few classic Hollywood western movies and was then was bestowed his favorite book. Bob Dylan’s autobiography, Chronicles: Volume one.
“It starts when he’s a kid, but kinda jumps around when he gets to New Orleans, not in sequence you know? It’s a good book.”
Of course that’s his favorite book. Kensei is the coolest man in the world. 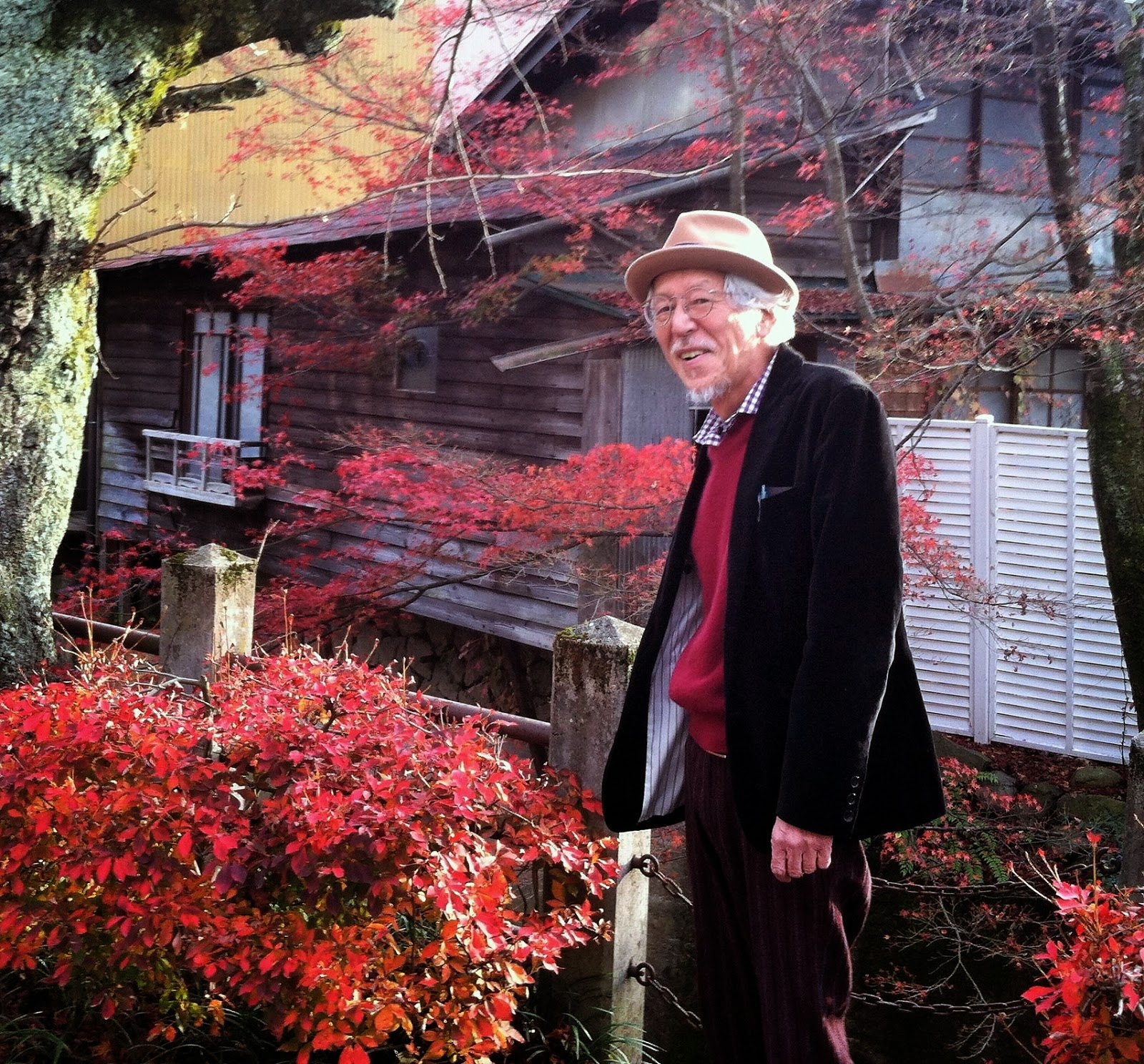 And of course Kensei will know more about classic everything than I ever will. I was lucky enough to see his library, an experience I found he hasn’t shared with many, and an experience I will treasure forever (or until I finish my bag of books and beg to return).
But Desolation Row will forever be my favorite place in Japan. Stop by if you come to Takayama, I’ll be the guy with a beard not making room for you at the bar, after all there are chairs by the Botsudan, and I got some books to discuss.
Joe Darris Mitchell lives in Takayama with his wife, who Kensei likes more than him anyway. If you enjoyed this story, read more about parties at Kensei's, or come see us at Desolation Row
Posted by J. Darris Mitchell at 8:30 PM