This is the Most Snow I've Ever Seen!

To a Texan boy, there ain’t many things more magical than snow. My family’s from Michigan, so I have a few pieces of memories of holding a snowball or watching in horror as one of the neighbors bashed my father’s snowman with a skateboard. But I moved to Texas for kindergarten, so most of my memories of snow involve cars crashing and making 11 inch snowmen that melt before noon. ﻿﻿
Takayama, Gifu has changed all that. It began to snow in earnest last Friday. My wife and I rushed outside for the smallest of reasons, to take out the garbage, to check the mail, always after bundling up under too many layers. The snowflakes that day seemed bigger than my hand, huge, silent masses of fluffy ice that were thicker than any fog. They would fall for a spell then stop and melt away before another flurry would begin.
What little snow that did stay on the ground I scooped up and hurled at my students. Though I gave the five-year-olds a ten-to-one distance handicap, I still managed to hit each of them with far more snowballs then they hit me. Ah to have eye-hand coordination. The game only stopped twice, once when I chastised a child for throwing balls made of slush and rocks instead of snow (I’m from Texas, and that don’t seem right) and once when the whole gang of them chastised me for some egregious sin I will never understand. Still, we all returned to the warmth of the school smiling.
vThe next day the snow committed to covering the landscape. The snowflakes shrunk to a tenth of their previous size, and instead of falling heavily for twenty minutes at a time, they fell unceasingly for twenty four hours. By the next morning the entire town was covered in (gasp) three or four inches of snow. I began to chant “this is the most snow I’ve ever seen!” unceasingly.
It was perfect really, for that day was to be a white Christmas. Though it was still early in December, the English school where we work was hosting a plethora of parties, and lucky for us they’d all be decorated with the most festive of precipitations. We pulled our scarves closer to keep the errant snow flake from finding its way in to our coats, and unloaded the car.


﻿
The party went by without a hitch, well, mostly. The games flew by. We served the Christmas cake, which in japan is a shortcake with pineapple rolled into a spiral around whipped cream and is not as good as it sounds. The kids, high on the cake, crashed into eachother like reindeer. Finally the big moment arrived: Santa was here! He stomped into the room with his hat pulled low. The youngest child was terrified and screamed at her mother for putting her on Santa’s lap. The older kids screamed “Joe-sensei!” and Santa looked around confused. The oldest kids waited in line, mumbled ‘merry Christmas’ and made off with their haul of goodies. But most of the students seemed genuinely convinced that of course ol’ Europeon Saint Nick would make it to an English school’s Christmas party in early December. What else does he have to do this time of year?
After that we braved the snow again, this time through enormous windows at the Japanese restaurant that was hosting our adult students’ Christmas party. We sat and chatted about the weather, about skiing, about what exactly I was about to eat. All the while I stared out the window as the snow kept falling. We ate and we drank until the restaurant turned out the lights illuminating the trees outside, and my beautiful panorama of leafless cherry tree branches and dense piney shrubs felt all the colder.
We left the restaurant and made for the nearest karaoke bar, though not until I chunked a few snowballs at the ten year old kid who was trying to peg his mom while she waited for dad to get the car. I consider it a success, because by the time we turned the corner, the entire family was furiously pelting each other with snow.
We tromped through the snow in single file, the man in the front breaking trail for us. I love the way snow sounds when it crunches under foot. It’s the sound of something miraculous compressing into something bland and pedestrian. It must sound like the opposite of diamonds being made.
﻿﻿﻿﻿I marveled at the town I thought I knew so well. Where were the streets? The sidewalks? Where were the trees I’d spend so many hours painstakingly cataloguing, learning which would bloom in spring and which would put on the most impressive shows of fall foliage. Under the snow, they were all the same: slumbering giants with nothing to do but shoulder the weight and the cold until spring. ﻿
﻿ The snow still seemed magic when hours later I watched it fly by as a taxicab drove us home from our last stop of the night, a Dutch Christmas poetry party. The snow hadn’t even lose its splendor when at the party I drank too much and had to sit outside in the cold and sober up. My friends found me out there, without a coat or a hat, and challenged me to make a snowman the next day. They’re good people.
I managed to make that snowman (with more than a fair amount of help from my darling wife) and still the snow seems magic to me. Today the temperature is rising to a whopping 44 degrees Fahrenheit, and the snow is melting. But even this is beautiful. The sounds of water dripping, of branches snapping up after losing their melting weight echo through our town, and it makes me appreciate the transient beauty of snow. Even in Texas I understood that snow could change everything overnight, but here that realization seems even more present. 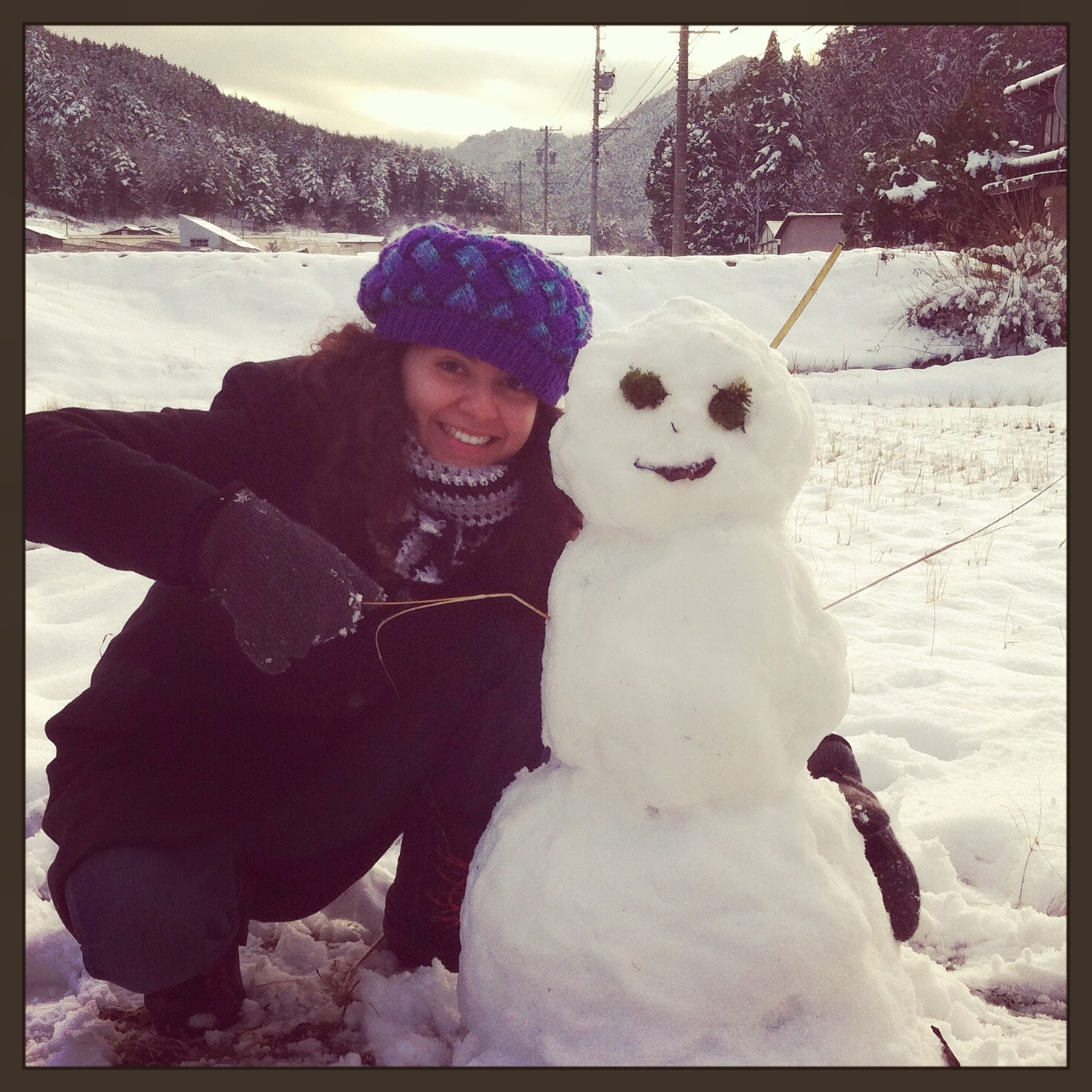 When the snow falls, another city awakens: a city where teachers attack their students with weapons made on the street, a city with the paths of human and beast laid bare for all to see, a city where even the trees dream. In this city spring may come for a day or two, but always the threat and beauty of the snow lies at the top of the mountains, threatening to come down and stay for the winter.
I for one, can’t help but invite it in. But let’s see how I feel in February.
Joe Darris Mitchell lives in Takayama, Japan with his darling wife. Though he's excited for the snow, he still fears the coming months. If you liked this story, please +1 and share with your friends!