My two best friends came to visit us in Japan, and the trip started of disastrously. They were supposed to fly in from Tokyo to Nagoya, but in a desperate effort to make it to a Halloween party, I had them catch the shinkansen so they could get here sooner. That’s right. In Japan, trains are faster than planes.
After an hour of waiting I abandoned my car in the passenger pick up area and started making laps around the train station. I yelled their names and clicked my tongue until my mouth was sore. After two hours I asked the shinkansen operator if a typhoon had washed the train into the sea. After three hours and a fresh patch of gray hair in my beard, I contacted the police. They took me to the station master who, after 20 sweaty, agonizing minutes, gave me the microphone for the PA system. This was my one and only chance.
“Tam Tran and Cole Welsome, this is Joe Mitchell. Please come to the Station Master’s office,” boomed throughout Nagoya station. I had done it and I collapsed from exhaustion, if they were here, they’d find me.
Seconds later, someone knocked on the door and the police opened it to the two smiling faces of my best friends. They looked like they’d just awoken from a pleasant nap, and indeed they had. Turns out I’d send them to the wrong connecting station in Tokyo, and they’d just barely made a train and arrived in Nagoya moments before. So I’d ruined our chances of making the party and probably taken a few years of my life, but, on the other hand, if the station master had let me use the PA any sooner, they wouldn’t have been in the station to hear it, and I would have abandoned them for a stiff drink. 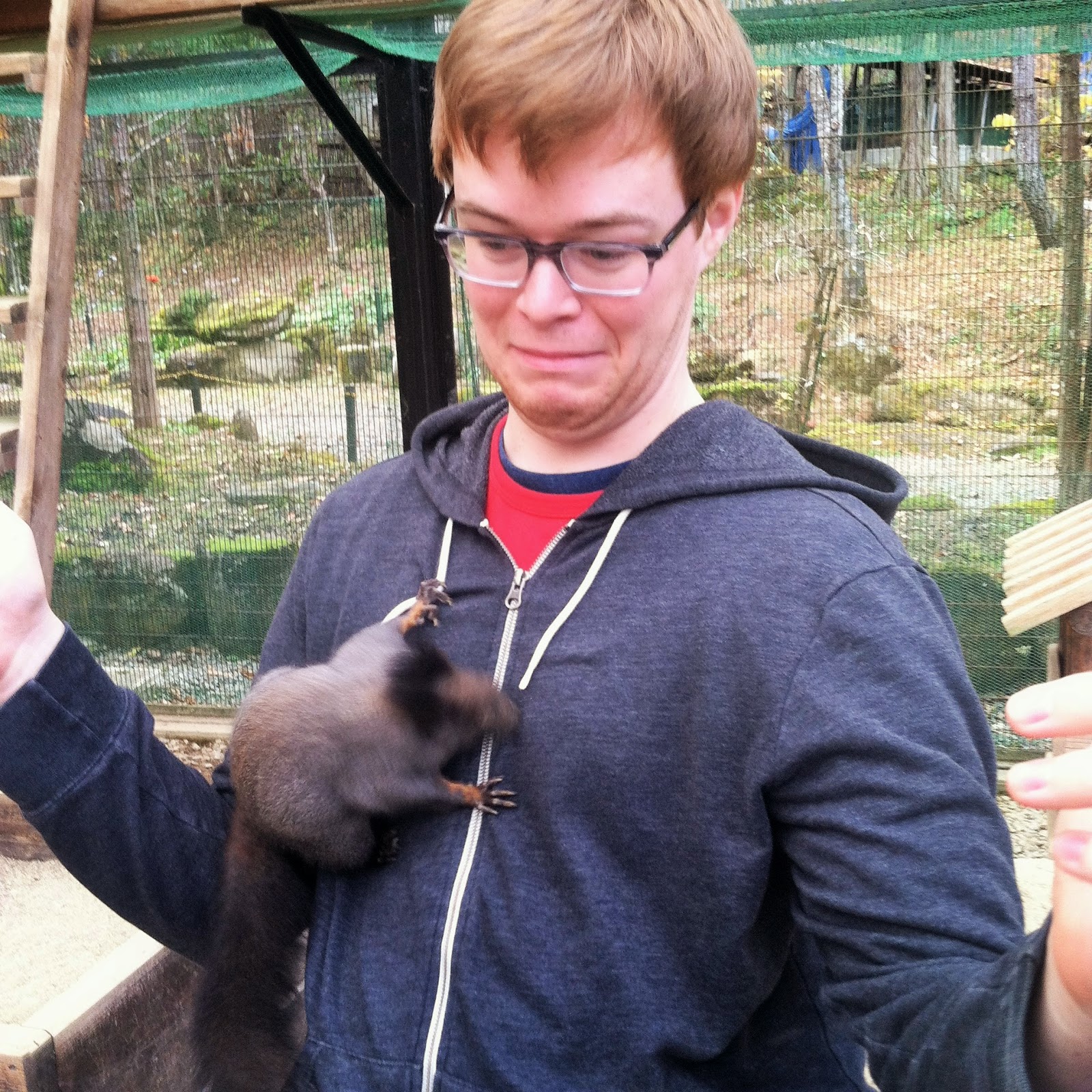 We still made it to the after party at the Karaoke bar, where they met Chaba (dressed as a woman and armed with a gun) and sang Takayama to sleep with Tam’s throaty rendition of Weezer’s sweater song, and Cole’s always stunning performance of “Witchy Woman.”

We spent a few days in Takayama, mostly enjoying the fall foliage and playing with monkeys and squirrels. We ate at all our favorite restaurants. Tam and Cole seemed most impressed with the curry restaurant we’d never been to before, though it made Raquel feel sick. You can never please ‘em all.

We left for Tokyo to make our reservations for Yazuda sushi. It was divine. Even after I told Yazuda-san himself I had eaten tuna liver in Takayama, and he (not so politely) informed me that tuna guts are always dumped into the sea, and in a mountain town like Takayama, it was far more likely that I’d eaten bear liver than tuna guts, it was still the most delicious meal I’ve ever eaten. I ate twice as much sushi as Tam and Cole, and they were forced to watch as me and the man who’d replaced Raquel at the 8 seat restaurant (she refused to eat sushi two days in a row) grunted our appreciation as we stuffed our mouths with the likes of sea urchin, needlefish and the best shrimp, EVER. Only when Raquel strolled in, after waiting on the steps outside the restaurant for an hour, did we make our exit. High on omega-3’s, I passed out in a stinky fishy mess, and we reconvened in the morning.
The next day we killed time with a giant Gundam until our reservation at the Robot Restaurant.
A note on themed restaurants in Tokyo: 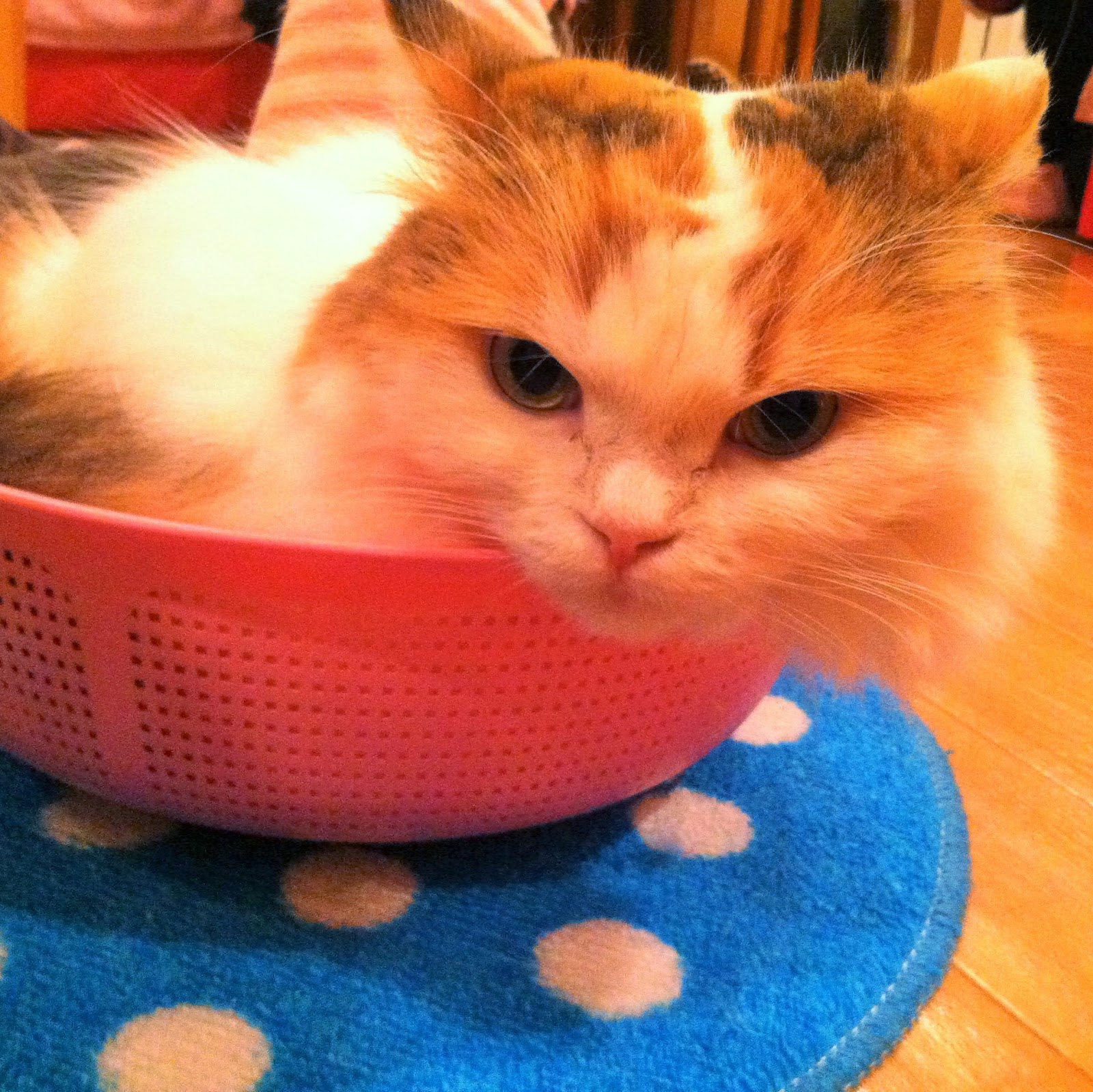 1. Cat cafes have far too many rules. Don’t pick up the cats, don’t let the cats sit on table, don’t touch the sleeping cats, don’t chase the cats, on and on and on. I found a cat who liked tummy-rubs, so it was still worth it, but for the tourist visiting Japan, avoid the cat café. You’ll have far more fun tormenting your own ball of fur when you return home.
2. Not all maid cafes are created equal. Raquel and I went to a maid café on our last visit to Tokyo, and loved it. The maids taught us all kinds of cute tricks, and the place was filled with all sorts of people, from Japanese bikers to British grandmothers. The maid cafe we took Tam and Cole to was empty except for a few single guys who spent a little too much time there. It was still overwhelming and we ended up paying too much (I wanted the maid dance instead of the photo, damn it!) but thus is life in Tokyo.
3. The Robot Restaurant is awesome. The Robot Restaurant had it all: Saxophone wielding angels and robot guitarists who played nauseating renditions of James Blunt songs, drummers on ten foot tall dueling robotic platforms, a giant sequined horse, even a chain gun-wielding Rita Repulsa (my first crush) who was eaten by a huge jungle snake. The show was so good that one of the local crime lords came out, complete with 5 hired escorts and two bodyguards. I heard someone complain that the crime lord’s women got all the popcorn, but I’d rather be popcorn-less than a prostitute any day.


We went shopping in Akihabara the next day, and I watched the chaos of Tokyo slowly blind my friends. They started strong, but by the evening Cole was complaining that the claw machines were a conspiracy and Tam looked like his beloved sage grouse, paralyzed by bright lights. We dragged them to Karaoke and plied them out of their daze with alcohol, otherwise I think they would’ve ended up in a puddle, trying to hide from the lights and the Japanese and the consumerism beyond anything Austin has to offer. But we had fun. Cole found a vending machine that served hot corn drink and drank way too much of it, and Tam and I danced to some street music, though when I blinked Tam had been replaced by a Japanese man furiously dancing with my crotch. I found my friends and we got the hell out.
We made the mistake of taking them shopping again the next day. Tam shrugged compulsively as shop owners made him clean their store fronts and Cole proclaimed he’d rather people watch than shop, though his back was turned to the seething crowd behind us. Raquel, oblivious to their plight, shopped like a fiend until they abandoned us for the nearby Meiji Shrine.
The magic of Tokyo is the juxtaposition of it all. On one side of the tracks is the busiest shopping district in Tokyo, on the other an ancient mystic forest, swirling with mist and sacred temples. I found Tam underneath a Torii gate, clearly looking relieved to be somewhere he could hear birdsongs. Cole had left him for a bathroom, so we set out into the park, hoping to spot a giant white tongue clicker. Meiji shrine and the park around it is beautiful, like something from another time. We saw three weddings, a collection of flowering bonsai trees, and woman who could make birds land in her hand. Meiji Shrine is magic.
I asked them what they thought of it all, of Japan, of Tokyo, and of Takayama. I think Cole said it best. “Japan is different down to the smallest detail, but the big stuff’s all the same.”
And it’s true. Everything is different in Japan, the stores, the restaurants, the games, but it’s still all the same, clothes, food, distractions. Like everything about the modern world, Japan has the rare ability to overwhelm but is usually underwhelming to a fault. But the great thing about it is when the flashing lights are too much, and there's too many people all around you, you can head for the wild that’s always pressing in on the cities and escape, as long as you’re willing to follow your friends. 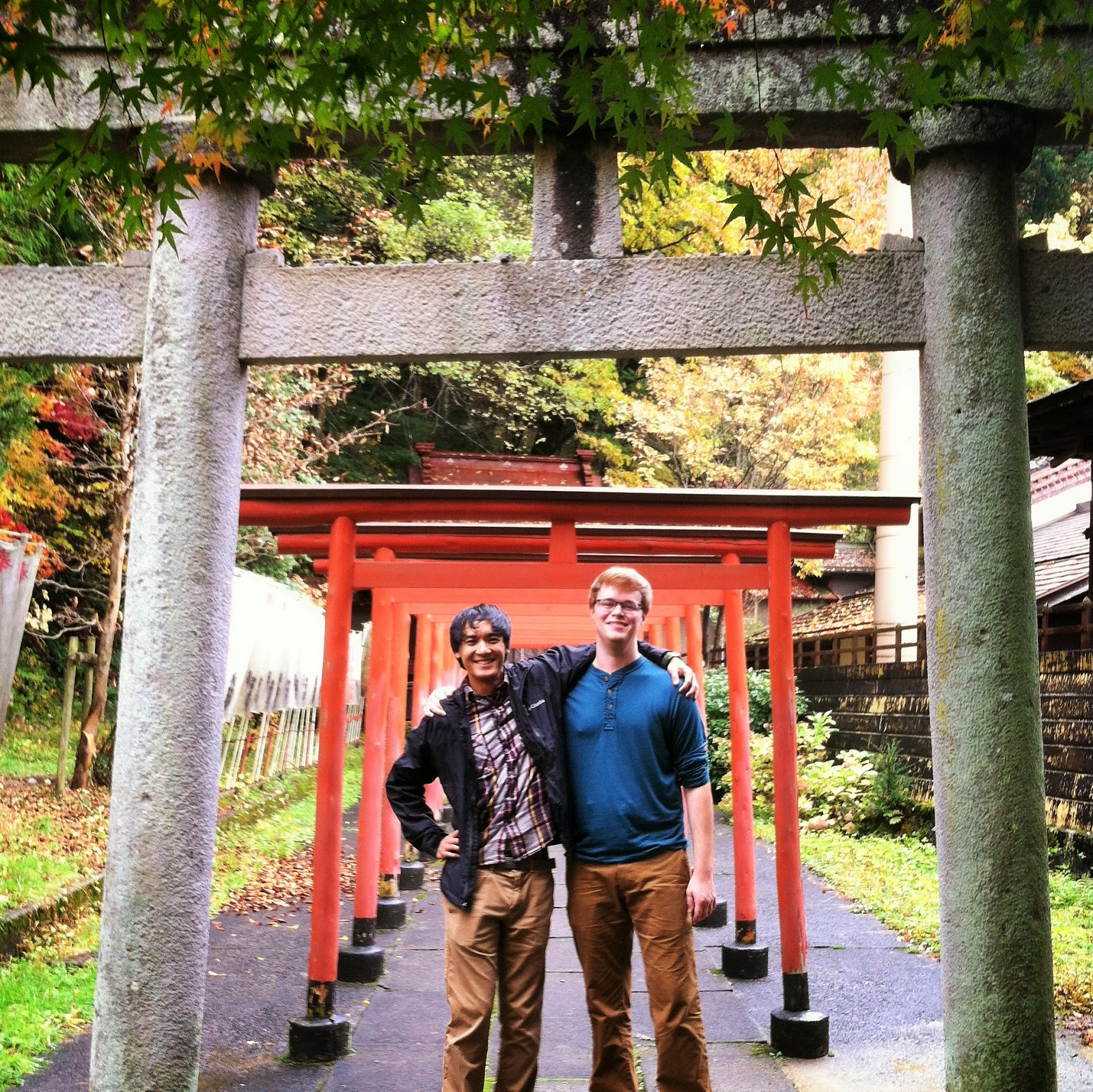 Joe Darris Mitchell lives in Takayama Japan with his darling wife, and already misses his friends. If you liked this story, +1 it, or read more about Tokyo, or Japanese food.
Posted by J. Darris Mitchell at 9:00 PM