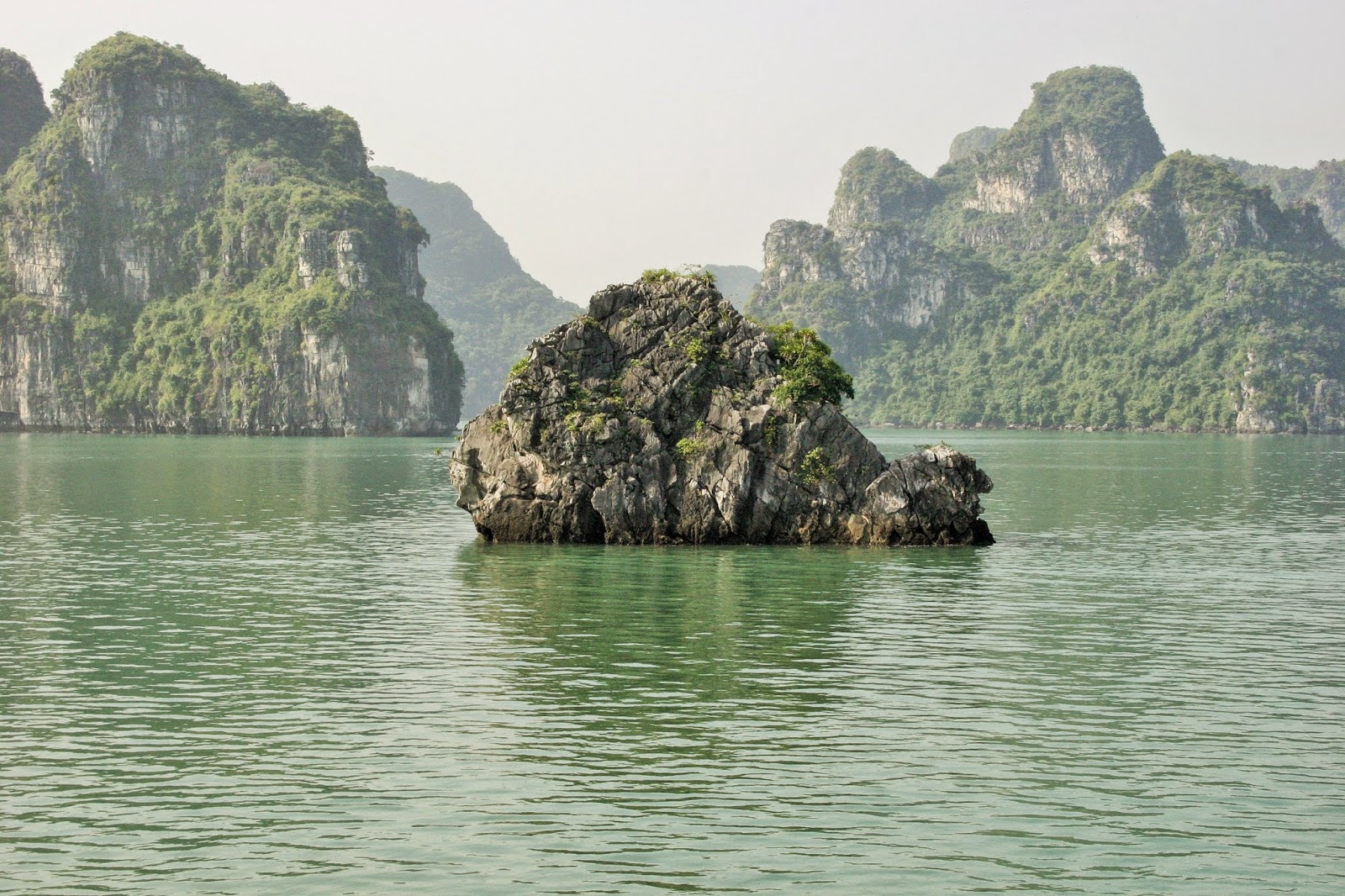 Halong bay is the most utterly gorgeous tourist trap I have ever visited. To appreciate it, one must charter a cruise and venture out on the water, where the natural splendor outside of the boat will distract you from your urge to abandon ship to escape the lack of substance within it.


Halong bay is made by the same forces that carved the Grand Canyon, yet is so different in composition it boggles the mind. As we sailed past massive boulders spattered with lush vegetation and hidden caves, I couldn’t help but think of the creatures that must live in the 1,969 islands. If Japan (where I currently live) is the land of Kaiju crashing through mountain passes into cityscapes; Vietnam is the home of dinosaurs. As our boat cruised between massive thrusts of limestone, I kept my eyes peeled, sure I would see a pterodactyl hunting a giant squid. It’s a place from another time, a world all of its own that can only be appreciated by chartering a boat, and going in, but therein lies the paradox: It is impossible to appreciate Halong Bay—kayaking through caves into hidden coves, boulders big as skyscrapers floating past each other, the screech of caca monkeys at sunset—without crowding onto a boat with exactly the things we go in to nature to avoid: drunken Spaniards, pretentious Frenchmen, and loudmouthed Australians.


Really I felt like the people on our boat must typify every experience that has ever taken place on a tour bus, boat or any other confined place with limited choice of weapons.


While we cruised around the bay, desperate for a glimpse of a rare caca monkey or perhaps a brachiosaurus, I overheard debates about the history of the word selfie, complaints about how the Australian booze was—surprise!—more expensive than the local brew, and lamented how my fellow travelers’ comparison of the food on the ship to a TGIFriday’s was appropriate, but their enthusiasm for the same meal was not.


But the bay was always there, eager to reveal hidden secrets that have been discovered a thousand times over by a thousand different people and will inspire a thousand more thoughts of our humble place in the natural world.


And, despite the company, we still managed to have a good time. When the crew offered to take us swimming, and the men on the boat (your narrator included) eyed each other warily, no one wanting to jump in and no one wanting to lose face in front of his lady on this tropical cruise, Raquel dove over the edge of the boat without so much as removing her glasses. Everyone shrieked in surprise, and despite my best efforts to follow her, the two French teenagers managed to pause the games on their cellphones, strip down, and dive in next to my grinning wife before I could so much as get my shirt off.


When the cruise took us to a fishing family’s floating home, we all laughed at the family dog that lived on the nearby island, enjoyed the strong-as-battery-acid rice wine, and let our jaws drop at the enormous fish the family was fattening up to be sold on the mainland. I was first in line for the oyster the grandmother of the family dredged up from the bay and handed to her son to be cracked open with a box cutter. It was seasoned only with the salt of the Pacific Ocean, and grown by this last of the fishing families. It was delicious. Once the bay was filled with whole communities of people like this, complete with schools and shops, but Vietnam—in its communist glory—deemed the natural splendor of the bay and all its creatures and coves more valuable than the traditional lifestyle it once afforded the Vietnamese. Aussies, Europeans and the errant American are willing to pay enough money so that the people here can protect the creatures instead of hunt them.


The quagmire of this family being allowed to stay on the bay because of their ties with the tourism industry that pushed the ‘genuine’ fishermen out bothered me less after seeing the oil floating around the houseboat’s engine. I don’t know if it’s a good thing exactly, but hey, it makes for glorious views and protected habitat.


The contradiction of clinging to a traditional lifestyle and embracing the conveniences of the 21st century is a way of life in Vietnam. It doesn’t seem the façade that Japan sometimes touts so proudly. People here harvest their rice by hand because they have to, not because it’s the way grandmother did it. Our guide in Sapa had a cell phone, while in the capital of Hanoi entire city blocks sometimes have to go without power. That seems to be life in this crazy country, where a cheap beer costs $.30 and an expensive one costs 50,000 Vietnamese Dong. I don’t know if my presence as a tourist helps or hurts, but I know it’s a hell of a lot better than America’s history over here, and if all they want from me is a few extra bucks so I can experience the magnificence of Halong Bay, what am I to do but pony up with other tourists, snap as many pictures as I can, and tip handsomely. 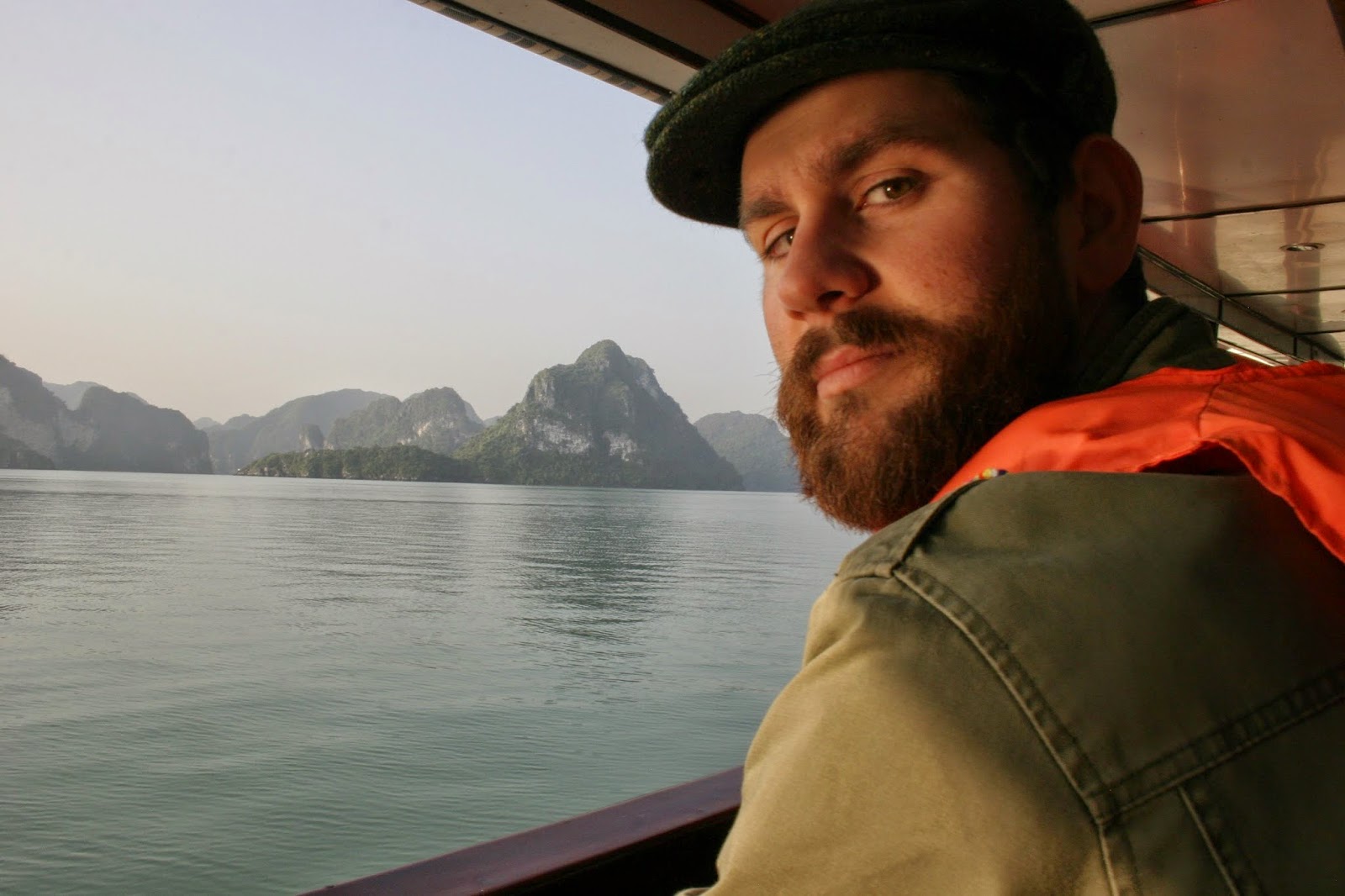 Good evening Vietnam. I can’t wait to come back.
J. Darris Mitchell lives in Takayama Gifu with his darling wife. This is the third installment of a series on Viet Nam. Read about the rice paddies of Sapa or about Hanoi the communist capital
Posted by J. Darris Mitchell at 8:30 PM