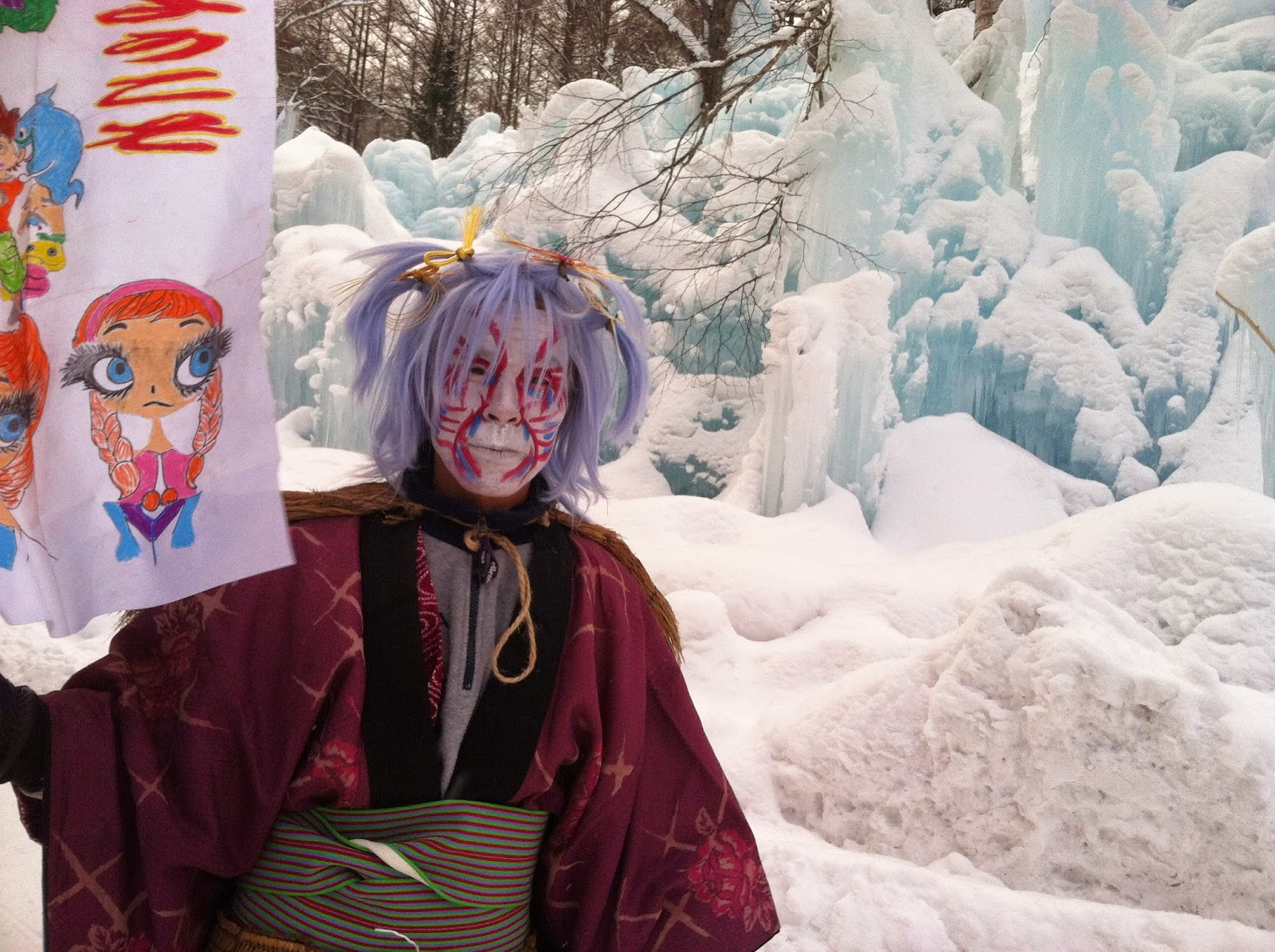 An ice demon approached me scowling and carrying a banner. He was dressed straight from the legends and smiled with too many teeth. I called my friends over only to find that they too had been confronted by one of these ice demons, their King in fact, the Magical Ice Lord Yushi!


But let me back track, you’re probably lost.


When the water molecule falls below 0 degrees Celcius (a convenient temperature to be sure) it begins to exhibit curious properties. When a people evolve around this molecule in its solid state, they too begin to exhibit quirks and curiosities of their own.


A curiosity of my own caused me to pile into a car to see this man named Yushi. I’d been told he eats bears, owns a mountain, and creates an ice forest every year. When invited, I always say yes to meeting people like this. My wife on the other hand, had no qualms about ignoring a Magical Ice Lord. When I asked Raquel if she wanted to join me, she simply chortled and snuggled deeper under our heated coffee table.


So I crammed into a car with too many foreigners and away we went to meet a man on his mountain, stopping only to throw snowballs into a frozen lake.


The ice forest began ordinarily enough. There were trees, and snow on them! It didn’t really seem like the kind of place that a Magical Ice Lord would want to live, but around a bend were confronted with a wall of ice.


It was 5 meters tall, and had swallowed up birch and pine in its hunger to expand. It looked like the prototype for the wall built to keep out the white walkers. Alex and I proceeded to insult it.


I edged through the entry way into the festival proper. Nothing in Japan is free, but I’ve spent 300 yen in far worse ways. I once hiked 4 kilometers to find that the entrance to the sacred pond I sought cost 300 yen to enter (as in go past the fence not swim). I remember laughing at the foolish Japanese who’d approach the gate, peak around a corner, and leave, too cheap to shell out 3 coins! I paid the entrance and realized that yeah, it was just a stupid pond and I’d been ripped off. They didn’t even have none o’ dem fancy colored fish or tiny lil’ trees or nothin!


The ice forest was more impressive. It rose up on either side of snowy promenade for maybe a kilometer. Fathers dragged children on sleds, vendors sold roast fish, and tourists snapped pictures with Japanese White Walkers. 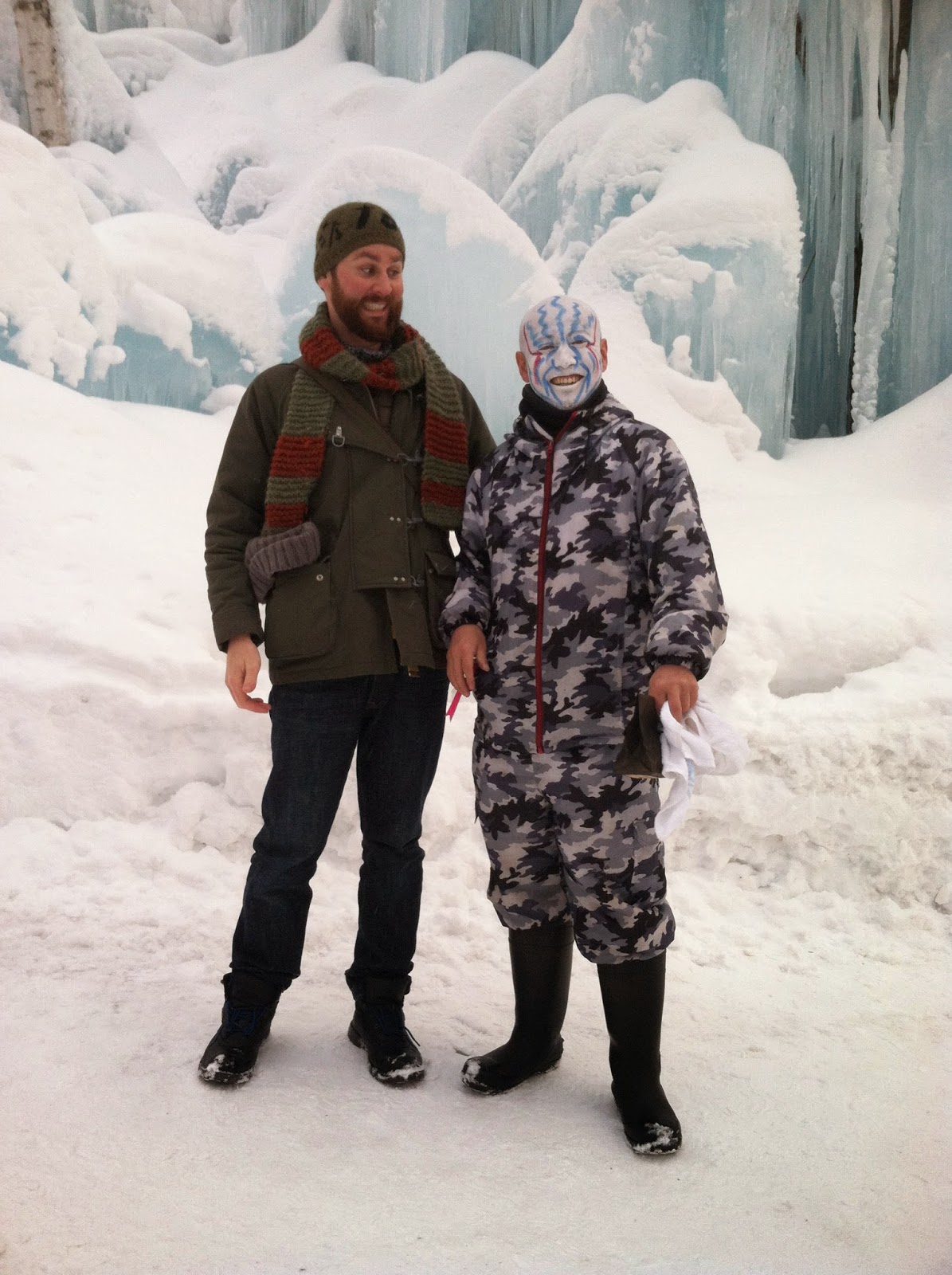 Eric introduced Yushi to me and like any good tourist I threw my arm around him and took a selfie. This was his family’s land, and every year the whole clan through this party and dressed up as beasts and priests and…a giant corncob? I looked to Nolico for an explanation but she only shrugged and mumbled something about this area growing good corn.


I swear, in Japan, everything and nothing is sacred. Here we were in this crazy winter realm, a land of demons and bears and ancient priests, and this dude was dressed up to hock corn. They weren’t even selling any corn! I don’t get it, but I guess I’m alone in this sentiment, for Alex giggled and asked if I’d take his picture with the stupid corn guy.


I tried a new fish (always a highlight for me) and we all wandered around and took pictures until the sun went down and the cold set in. Lord Yushi saw us shivering and offered to let us use his hotel’s Onsen. That’s right, this mountain king even had his own volcanic hot tub. I nodded dumbly, this sounded too good to be true! And indeed it was, for though Lord Yushi was indeed generous, he was also hosting a festival and wasn’t really in the position to be giving guided tours. Instead he led us to the winter games.


Somehow Eric, Alex and I all ended up not only competing but in the same heat, even though most of the competitors were children or their grandparents. But with a grand prize of 3,000 yen on the way (about 30 bucks) we were not going to let those little bastards make off with our loot. So when told we had 60 seconds to stack a tray with as many hazelnuts as we could, we jostled for position as we neared the bucket of hazelnuts, and stacked those trays to the sky. I lost to Eric, but he was promptly beaten by some dumb kid’s mom.


Our heads hung low, we watched the rest of the competition until it was Nolico’s turn. She’d been watching the competition closely, and had quite the strategy for stacking nuts. She wobbled back with more hazelnuts in her tray than I thought possible. She ended up coming in second place! We patted her on the back and congratulated her until we found out that not only did she win 2,000 yen, every competitor received 500! We had drinking money! Alex struggled with the economics of it (“But how can they make money if they give away more than the entrance fee!?”) but when Nolico bought us hot sake he stopped complaining.


Everyone lined up to make mochi after that. To make mochi you smash perfectly good rice with an enormous hammer while a man dressed like priest kneads the dough between strikes. All the while an ice demon humps the person trying not to smash the preist’s fingers. I was shocked everyone in Lord Yushi’s family still had all their fingers. Mochi hasn’t really made the jump to America. I’m not sure why, It translates roughly to fucking-disgusting-rice-goo-that’s-impossible-to-chew-and-even-harder-to-swallow. But most people seem to like it.


Humped and tired, we knew it was time to leave when the band (playing on a stage made of ice) started playing a jazzy rendition of “let it Go” on saxophone. I made awful puns about “the cold not bothering me anyway” until actually it did start to bother me and we got in the car and drove home, happy to have a designated driver, and happier to have heat.