Four days after discovering I was going to lose my left nut, the new teachers moved in. The Let’s English teacher life is a strange one, for each teacher must introduce their replacement to the way of life they’re about to say goodbye to. 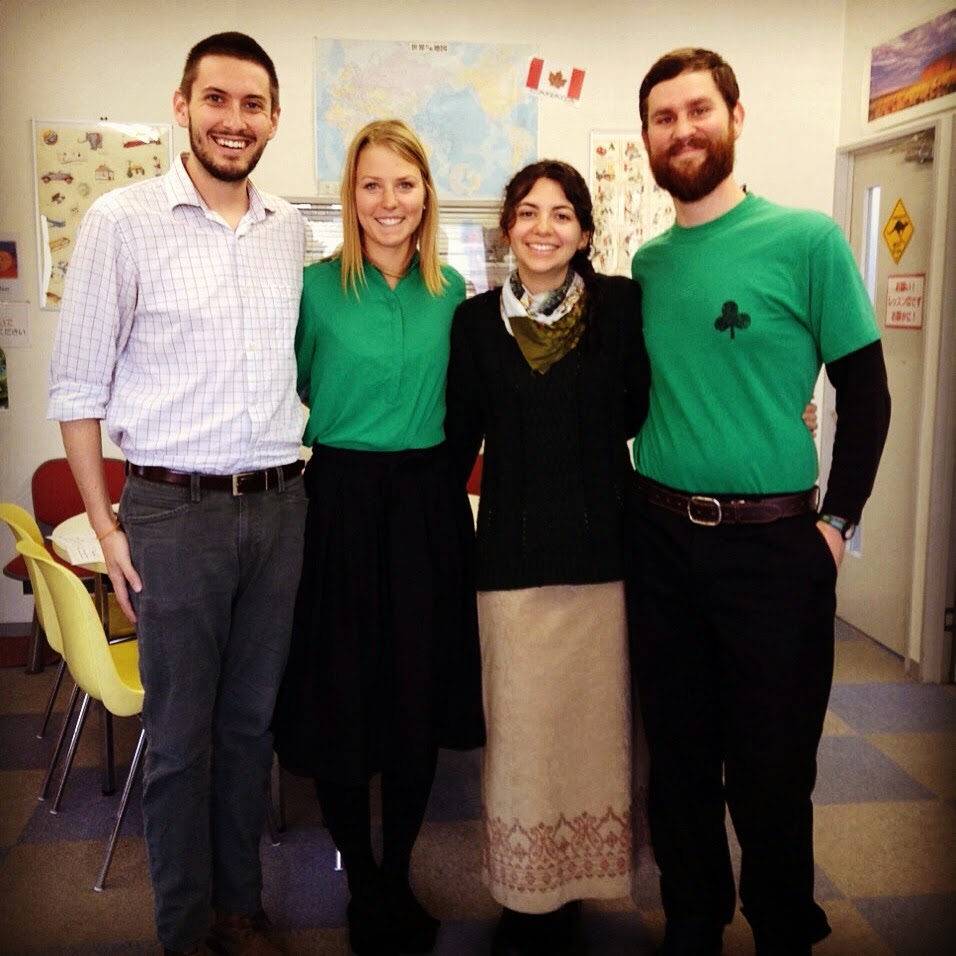 The first night was complete with awkward conversation, carefully sipped beers, and commiserating about our boss (not Iwayama-san,never Iwayama-san). But as the days went on, we started to grow a bit closer.


They say food is a way to man’ stomach, and if it’s true then Brian and I are friends indeed. My obsession with peanut butter had been unrivaled on any of the islands of Japan. Yet Brian has forced me to pass that crown. When they moved in we had a half of a jar of peanut butter (Brain continues to insist it was less) as well as another giant unopened container, like big enough I could lift weights with it. It’s hardly been two weeks, and somehow the second jar is almost empty. Brian eats it with everything he can think of: bread, ice cream, pancakes. Raquel has been mercilessly insulting his love of peanut butter and insistence on having ketchup with his eggs, to which Brian simply smiles, shakes his head and says, “Ra-ke-ru!”


I thought Sarah was better suited to the quiet mountain life. When I met her I thought she seemed quiet and polite, but as time has passed she’s relaxed enough to revealed her true nature. Sarah makes noises, and they’re impossible to describe in words. Suffice to say that before we went to bed last night Sarah gave an impassioned speech about the benefits of waking up and growling like a dinosaur, and called on us to try this morning ritual because “it makes getting up more fun.”


The four of us spent yesterday cruising Takayama, and I think our relationship took a turn for the serious. We started the day at my favorite hangover spot, Arai Udon. That Brian tried to argue for another restaurant and I flatly refused his request speaks to how comfortable we’re getting with eachother (at least Raquel and I are comfortable busting Brian’s chops). We went to a thrift shop after that, where Brian and I wandered aimlessly, Raquel got her shop on and Sarah danced ceaselessly. After that we explored the Big Valor.
The Big Valor is the closest thing Takayama has to a shopping mall, in that it’s a couple of clothes shops nestled atop a grocery store. On the weekends families dress up in obsolete Tokyo fashion and strut while grandparents eat red bean paste and watch nature documentaries in the food court. Raquel and I bought juices boxes and found a bench to enjoy the show. While waiting for our roomies to find us we caught Sarah whipping her head back and forth, looking for Raquel and asking, “Mom?"
Yeah, it’s getting weird.
Juiceboxes drained and the whole day ahead of us we set out to peruse this pinnacle of culture. Brian and Sarah laughed at Japanglish T-shirts, Raquel bought coloring books, and I got mauled by a 5-year-old whose mother didn’t realize that the towering bearded white person whose crotch her son was nuzzling was actually his former English teacher.
Onwards we went, in pursuit of ever greater thrills. The next stop in what hopefully will mark the true beginning of a long-lasting and bizarre relationship was the Sega World. Sega World is like an arcade, except instead of games it has a fleet of claw machines and on the first floor, and coin games and chain-smokers above them. We dove in with reckless abandon. Raquel and I tried our hand at winning a stuffed animal while Sarah tried to make change and ended up with 300 useless metal slugs instead. We took our devastated roommates upstairs, plopped them down next to one of the many chain-smokers, and introduced them to the enigma that is Japanese coin machines. ﻿
﻿


A man can never win at a Japanese coin machine. They’ve made it illegal to cash in the coins for prizes, so literally all you can hope to win is more time before you lose. This means no matter how long you play, all you’re left with us a nagging sense of wasted time, and a feeling that if you just would have had a few more coins, you could have beaten the system. Brian and Sarah fared no better. Their coins gone, they looked to us for salvation.


We played Japanese air hockey (better than American air hockey because of the rainbow round) and finally went into a photo booth. A Japanese photo booth should be on everyone’s bucket list for a visit to Japan. They’re simply amazing. They enlarge your eyes and lips, whiten your skin, and generally contort your visage into something from anime. It’s incredible.


Finally exhausted, we made for Indian food. We had a vague idea of where it was and by some stroke of luck I spotted it and Raquel pulled over. We feasted on curries hotter than anything I’ve had in a year and each had a piece of naan larger than a pizza. Heaven, that is until the indian food set in halfway home, and Brian demanded first for the bathroom. Raquel and I took offense at this, but ultimately agreed to wait in line for our own toilet. At least he lit some incense.


So there it is, the dawn of a friendship, complete with food, fun, and sequential shits. I hope our replacements visit us in Texas one day, so we can share the eccentricities and quirks that can only develop when people live together with everyone else we know, who will be forced to look in from the outside and shrug, thinking simply, “I don’t get it.”