Perhaps if my wife and I had come to Japan earlier we would have stayed longer.

﻿﻿﻿
We arrived in June and weren’t greeted by the majesty of the sakura, the cherry blossoms. In Japan, the sakura represent the start of spring and of the New Year. For me the sakura were always the end game. I knew that life in Hida-Takayama would be different, and winter would be cold, but that in the spring, the sakura would bloom, and I would say farewell. And for a time even that seemed doubtful, for when I asked about the festival for which I’ve been waiting for nearly a year, most of the locals would only frown and said “snow.” And that was why, not 30 minutes after finding out that I was cancer-free, we bought tickets to the shinkansen, the bullet train, to Kanazawa.
Three days off celebration later, and we were running like like hell to make our connection in Toyama. I was stoked. Even discovering that it we’d boarded a reserved train and that we’d have to pay extra didn’t bother me as I watched mountains zip buy, admired cars crawling along their archaic highways, and generally tried to combat motion sickness. This thing was fast, faster than (most) birds, faster than (old) planes, faster than a (rather slow at only 200 miles per hour) speeding bullet! We rolled into the station, I pried myself away from the window and looked at my smiling wife.
I love you,” I told her.
“Why?” she asked, grinning like girls do.
“You gave me the window seat.”
Her grin weakened a bit.
We emerged from the station and laughed at the queue of Japanese and gaijin waiting for the bus. Ha! Who would want to take a bus on a beautiful day like this? The park’s not far, Takayama is colder, and you’re going to miss the sakura! Thirty minutes of hat-snatchingly cold gusts of winds and just one measly sakura later, we found a temple that was only minutes from out hotel. Our walk had done little but waste time, for even the seafood market we passed had been slowing down, lunchtime being something as fleeting as the cherry blossoms in Japan. Annoyed but not beaten, we snapped the first of over 500 pictures of the soft pink blossoms and walked the next 50 meters to drop our bags at the hotel.

We were off to the magnificence that is Kenroku-en Garden during sakura season! Yes it was cold. Yes it was cloudy. No, it didn’t matter. Our march to the garden began with a row of twenty? fifty? a hundred? sakura bursting forth down the main avenue. Raquel darted through traffic to take pictures as I carefully avoided a gaggle of bleached blonde Japanese boys.

I don’t think that the Kenroku-en has an official beginning or end, but we somehow meandered down pathways that each outdid the one before. We strolled through the plum gardens, Raquel fuming “How can they already be done? There’s no bugs to pollinate them!” and mozied under ancient pines held up with massive inverted croquet mallets. Finally we found our way into…let’s call it the central promenade.
A lazy stream circled a grove of every sized sakura while Japanese tour guides barked what I hope were elegant haikus into loudspeakers over the twittering conversation of the tourists. Amateurs dueled for space with selfie poles. Professionals adjusted their F-stops and tripods, and Raquel and I tried to fit somewhere in the middle. (We had only selfies and F-stops, no poles of any kind)
From there we set out giggling for the nearby castle.
This was my favorite part of the Gardens, for through a pink malaise of blossoms photographers of every caliber tried to frame the castle in all its glory. I took a dozen of these photos myself, and mused briefly on what having a castle surrounded by soft pink flowers might do to a man’s libido. My guess is good things.
We hopped on and off a bus and arrived at a near-deserted riverside walk flush with pink blossoms. We shared the sakura with only four other people: two old ladies snapping unsmiling portraits of each other and a professional photographer taking glamour shots of a young woman dressed in an unusually flattering Kimono. Raquel tried not to get caught peaking at the old ladies and I tried not to get caught peaking at the model’s photoshoot but the voyeurism ran thin and we marched on.
We spoke of beauty, of the transience of the seasons, of love and life, but alas, we came upon on our hotel before we came upon enlightenment. There we took a good friend’s advice and rather than showering sought out the public hot baths. Public baths are always a better decision than the tiny boxes with a trickle of water that are Japanese hotel bathrooms (just be sure you scrub before getting in the tubs you greasy foreigner). At this particular hotel the bath was on the roof, so not only did we get a shower and a soak, we got to do so while admiring sakura 14 stories above Kanazawa. Totally worth the male nudity. If you don’t think so, do yourself a favor, and don’t ever travel abroad. I was careful to cover my tattoos and not my lonely testicle with a hand towel because I’m polite, not prudish.
Refreshed, relaxed, and reclothed, we set out for the evening’s entertainment, which proved to be a thoroughly disappointing experience. Raquel (I will blame her forever for this) was too quick and ordered the sushi set, so instead of ordering piece by piece an avoiding the gross stuff, so we had to choke down squid and octopus. I love Japanese food, even the gross stuff. I’ve eaten fried fish skeletons, shirako (that’s fish sperm to those keeping score at home), loach, even Bar-B-Q’d horse, but try as I might I just don’t like squid or octopus on my sushi. On a stick? Maybe. With some noodles? Sure! But on rice, with nothing to hide the texture? Yech. Still, I chewed through and was ready to order more, but Raquel pushed her squid in front of me and begged me to ask for the check. We went to an unmentionable bar not worth mentioning after that, and rose the next morning to hunt out more sakura.
After a brief stop at the contemporary art museum—I liked they swimming pool exhibit, but was flabbergasted and a little offended that they would host an architecture for dogs exhibit at the same time as an exhibit for the ‘architecture post-Fukushima—we sought out more of the intoxicating sakura.
A day of hiking through hills and hidden gardens and we found ourselves at another riverside park, leaning against a wall that both supported sakura trees and sprouted fresh mint from the mortar. Old men smiled at us and Pilipino tourists sexually assaulted a low hanging sakura branch. I nursed a beer and we both composed Haikus. Until next week, my final post from this amazing country, I leave you with advice for visiting Japan. 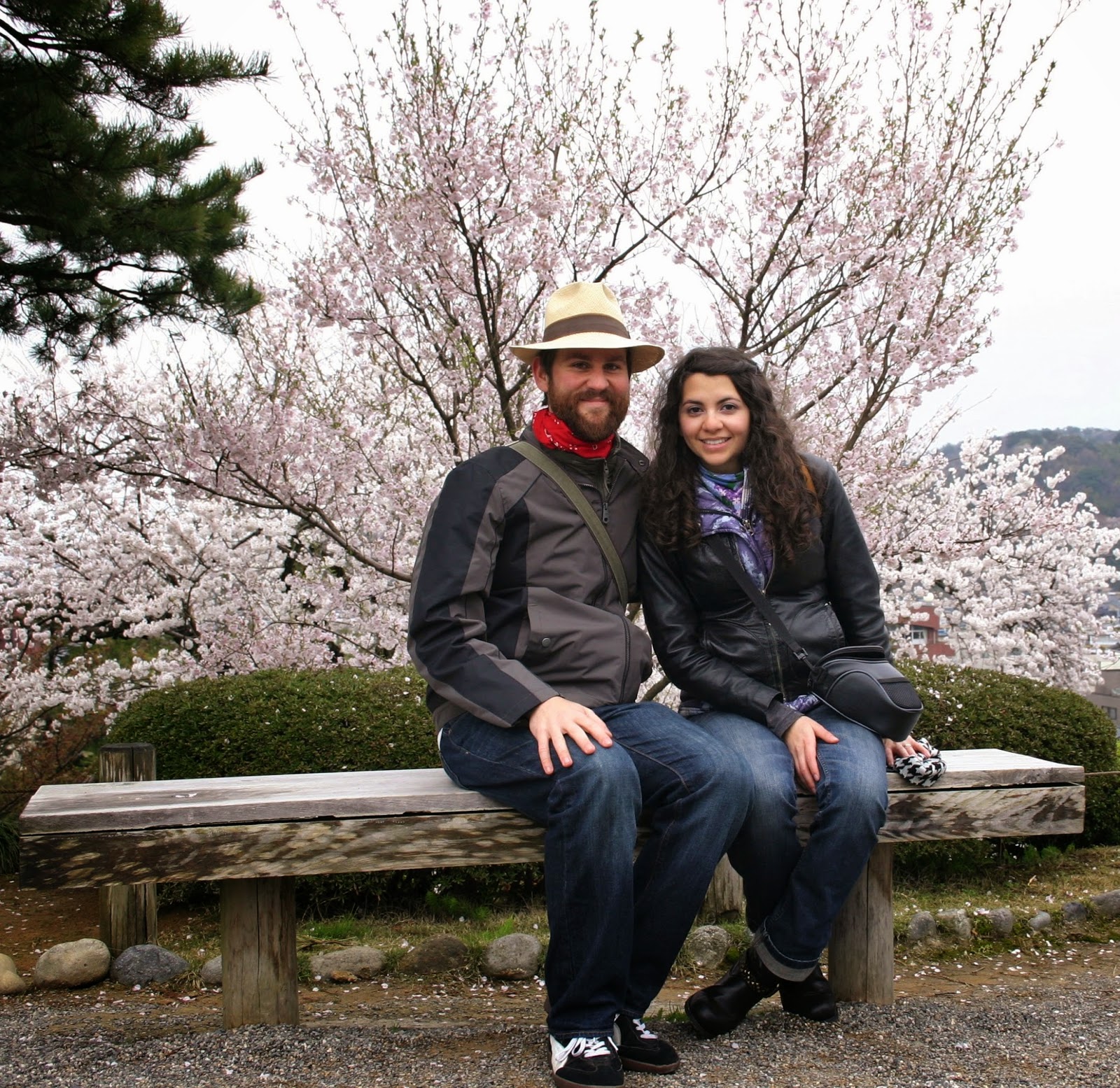