CAUTION: This post has Australians in it, so there is gratuitous use of the word cunt. Sensitive cunts are advised to tune out.


Our first few hours in Nagoya were spent driving around in a sweltering car listening to our GPS yell Japanese instructions on how to get to Immigration. Somehow, we found the place, and got our residency cards.


Yay! We get to stay. Time to celebrate.


We arrived at the hotel ravenous and headed out in search of food without showers. Bad idea. We found a restaurant in a basement and were served dumplings by the Chinese chef’s children, who were raised in Japan and spoke English. Energized by the globalism of the experience, we pressed on.


My wife wanted to go shoe shopping, and after 2 days of festival drinking, I was obliged to go with her. She thinks the women’s fashion in Japan is lame except the shoes. “It’s all tan and pastel pink, but the shoes are boss.” Unfortunately she was a half an inch too big for every pair of shoes she found. She doesn’t even have big feet. She’d squeeze into some sweet spiky platforms, stand and pout. Too tight. Eventually Raquel’s stench overwhelmed her and the salt flats growing on my shirt betrayed my misery, so we went back to the hotel.


We showered, napped, and went out to a bar called the Elephant’s Nest after hitting up the arcade next door.


The Elephant’s nest wasn’t very crowded, so we sat a table next to a group of gaijin. We caught them glancing at us, and not knowing how else to make friends, we glanced back. After a few sips of beer they asked us to help settle a bet. They wanted to know where we were from. “America?” We nodded. Their friend lost the bet, but he left before buying the next round. “Where do you think we’re from?” the two remaining gaijin asked, sidling closer.


“England? Do we sound like a couple of English cunts to you?”


That makes two times we have switched the Aussies and the Brits. They both hate it. We kind of love pissing them off.


They guessed what part of America we called home by asking what kind of food we liked.


We pretended to care about baseball but the charade quickly fell apart.


“So you’re saying this cunt here’s been to more baseball games than you?”


We nodded, but explained that we were going to the Sumo tournament the next day, so it’s not like we didn’t like sports or anything. They were going too, and that somehow convinced them we were sports aficionados “Oh yeah, what sports do you like? Rugby?” No. “Cricket?” Nope. “You cunts would love cricket!” They showed us videos of glove-less catches while I tried to think of something else to talk about.


The beers set in and we talked of travel tips to our homelands, of kangaroo steak and the beauty of Sydney, of the pros and cons of 6th street and the Bar-B-Q hierarchy in Austin. They explained the rankings of cunts in Australia (Good and bad cunts are both good, as is sick cunt, in fact cunt is a compliment unless you’re called the dreaded annoying cunt). The conversation only grew heated when it turned to the metric system.


I agreed with them mostly, the metric system is superior in a lot of ways. I mean, who really knows how many feet are in a mile? What’s the relationship between gallons and tablespoons? Why are their two kinds of ounces? But I would not budge on my love of the Fahrenheit scale. Fine, use Celsius for science, but for the weather, Fahrenheit is ideal. Each degree of the Celsius scale covers too much sweat. Fahrenheit is more precise. Why does Celsius use negative temperatures when it regularly gets that cold? Zero degrees in Farenheit means you’ll lose a toe, plain and simple. And why only use numbers up to 45? In Fahrenheit, if its triple digits, you know it’s damn hot or you need to go to the doctor. The Aussies didn’t agree.


“But that’s not really that hot.”


“Yeah but in Celsius 30 degrees is 30% of the temperature of the water boiling on your stove.”
Right because that’s what I compare shorts-weather to: a pot of soup.


“Why bother have days that are negative?”


“Well we got a right smart cunt here don’t we?” One Aussie asked the other.


“This cunt likes 1-Direction! You fucking cunt, you!”


We all laughed and finished our beers and agreed to visit each other’s countries once we got home. We hoped to meet again at the Sumo match, but being sports fans, they had much better seats than us, and we didn't see them again. 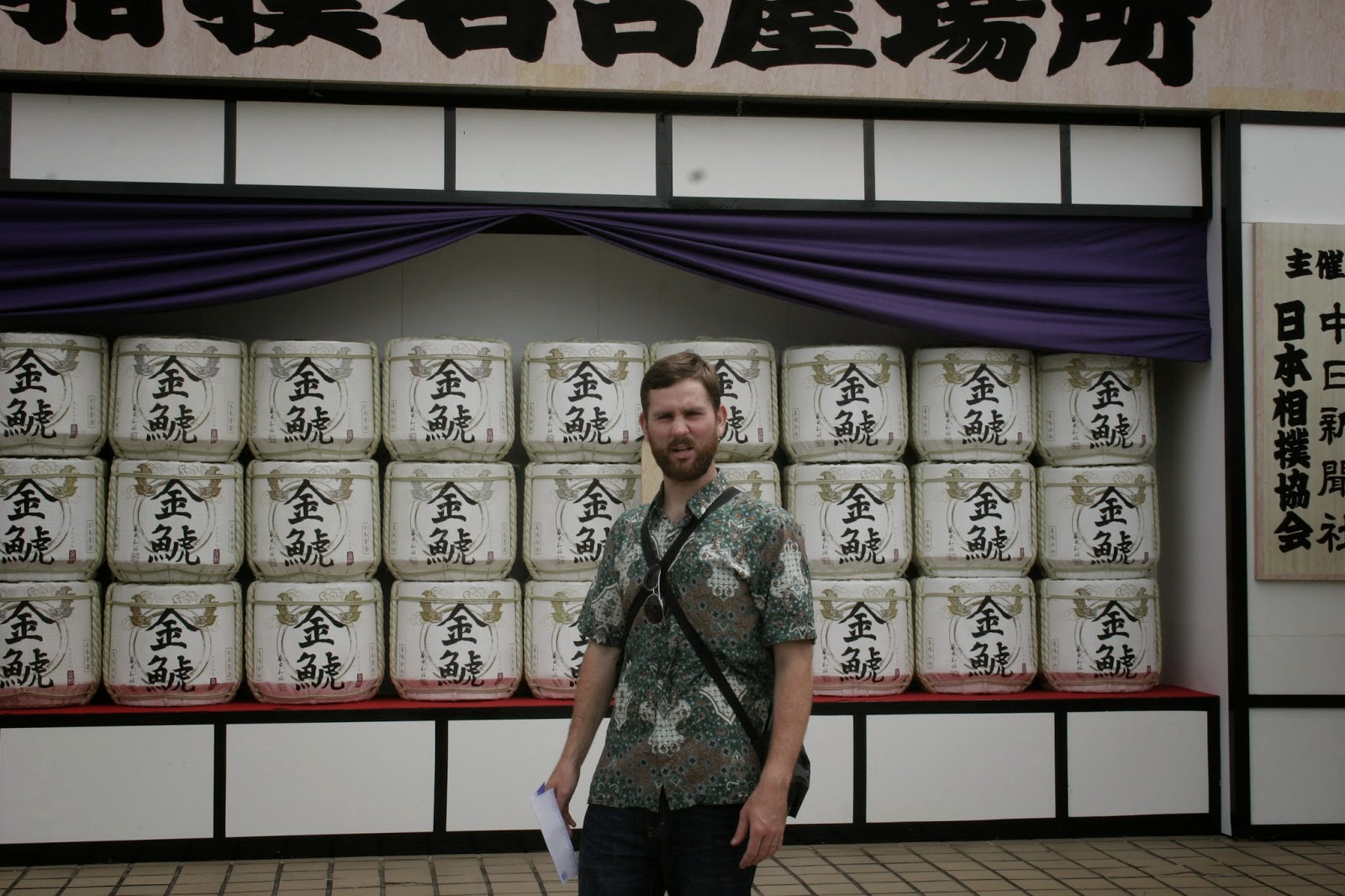 Yup. That’s me. The American cunt at the Sumo Tournament.

Joe Darris lives in Japan with his darling wife. Normally he lives in Takayama, but sometimes the schools close down for a week to give the teachers a break, and he gets to travel. If you enjoyed this story, please +1, and share with any Aussies you know. SUBSCRIBE if you want more!

Tune in Thursday to hear about the Sumo match that almost ended our marriage!
Posted by J. Darris Mitchell at 5:00 AM