Kyoto holds a false glamor. It’s a tourist town, filled with expensive cameras, sweaty foreigners, and overpriced souvenirs. I’m sure this is unfair, but that’s what I experienced. Kyoto’s power emerges, like a cicada from its mystical slumber, during the festivals.


During the day, Raquel and I went sightseeing like the tourists we were. We saw the Golden Pavilion overrun by Germans and hiked across the city to find Kiyomizudera Temple covered in tarps. The only thing I really liked was Inari Shrine.


Inari Shrine is home to more Torii Gates than any other place in Japan. There’s thousands of them, each paid for by someone (corporations included) eager to appease the gods. It might sound hokey, but I like it. Millions of dollars are spent to be part of this place’s power, and you can feel it. It’s not just me either, more people were praying at Inari than anywhere else I’ve been in Japan.


Walking up the mountain path, through the gates, is glorious. Tourists huddle here and there, and they add to the magic of the place. Because of their presence, you truly notice the moments when you round a bend and find no one. No family. No Germans. No National Geographic Photographers. All of a sudden you’re alone, with 1000 Torii Gates to yourself. When this happened to us, we’d do what any good tourists would do, I waxed philosophic about the timelessness and beauty and blah blah blah while Raquel shamelessly shot videos on her phone.


The real fun of Kyoto comes out at the festivals.


Raquel was eager for street food and I was excited to buy tallboys of Asahi “The Extra” and drink them on the street.


Crowds overflowed the Gion festival. People of all ages were dressed in Kimonos: beautiful couples, young women with exquisite hair and self-conscious men with that special look of pride and foolishness that only comes when a man knows he’s doing something to get laid. There were respectable older women taking pictures of floats, single twenty-somethings preening around for other single twenty-somethings, grandiose old men, adorable children and more beautiful women. There were so many people that one point that crowd simply stopped moving, completely, for 3 long minutes. No one seemed to know why, but we were all glad to escape the crush.


Everyone was there to see the floats. The floats are astounding. They tower over the crowds, decked in lights. Each is unique, hundreds of years old and home to the Kami, Japanese deities somewhere between a God and a spirit. Each float had a stamp, and for the low low price of 100 yen, I too could have a stamp in my notebook! This confirmed my suspicion that collecting is a deep rooted part of the Japanese psyche. Figurines, pokemon, stamps of the Kami, they collect it all. I, a former pokemaster, queued up with the locals. I got seven stamps before I got too drunk to continue, and I’m damn proud of that entire statement.
Meanwhile, Raquel was hunting for food. We bought ayu earlier (read more) but we also ate stir-fried noodles, crepe on a stick, tentacle on a stick, meat on a stick, and Raquel’s favorite,cucumber on a stick. It was lightly salted and served ice cold. She was in heaven. 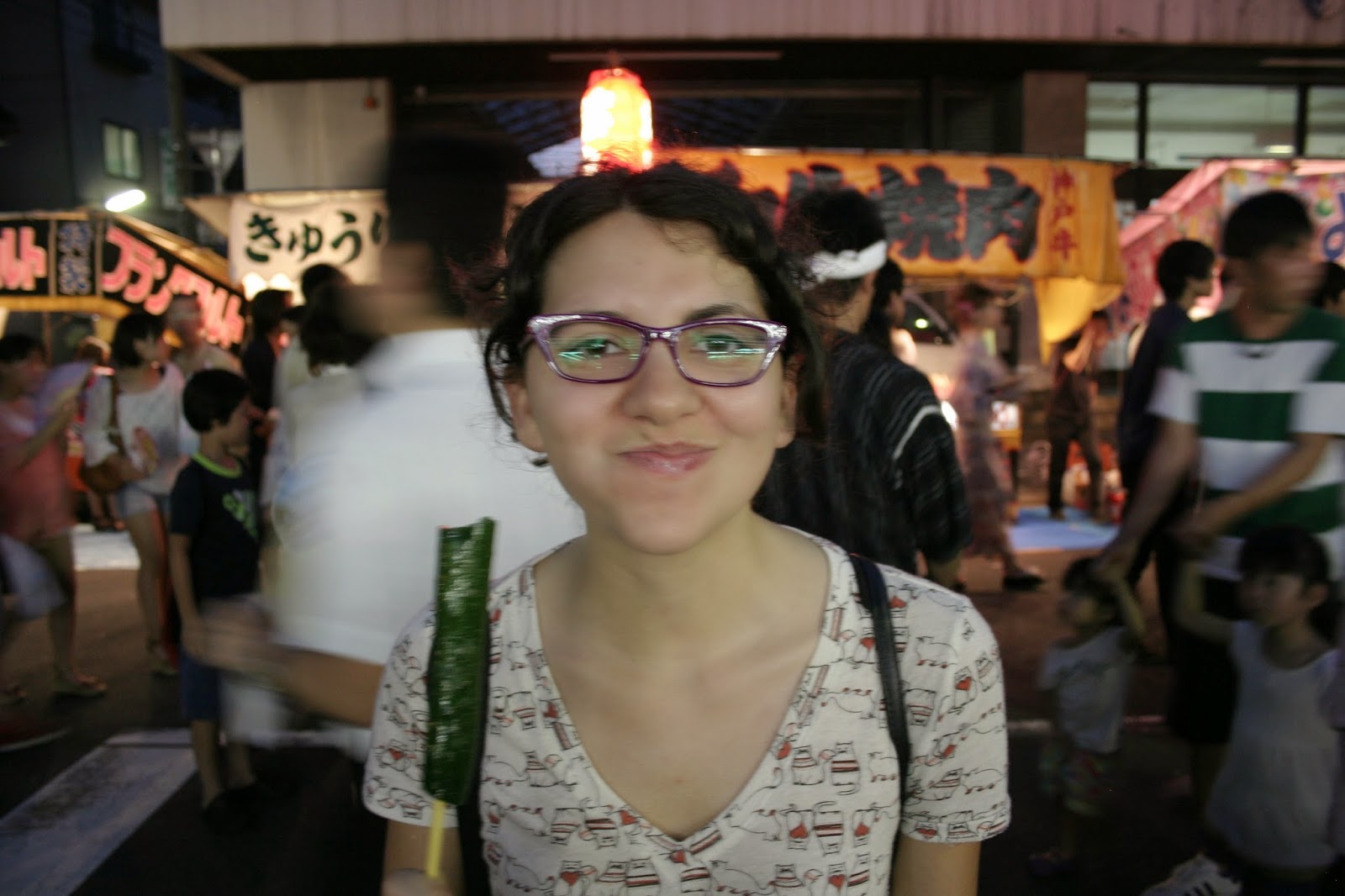 Other entertainment of the night included catching fish with paper nets, a task as impossible as it sounds. I am a pet addict, and could not pass up the opportunity. Drunk, I mangled my paper net in seconds. I resorted to dunking my bowl into the kiddie pool of dying fish. Victorious, the carnie (do you call them carnies in Japan?) bagged my catch and sent me on my way.


Raquel was not happy.


“What are you going to do with those stupid fish?” she fumed.


I laughed and boasted but quickly realized she was right. In my drunken stupor I believed I could get them back to Takayama without issue, but once there I’d need to buy a pump, a filter…


“Darling, do we have any big glass bowls or vases?”


“You are not putting those stupid fish in a Kitchen bowl.”


These fish were going to eat into my beer money. I needed to dump them, and fast.


Adults are for the most part, rational, sane human beings, so I targeted the exception: parents. “Sumimasen!” I’d yell to a dad already carrying a bag of fish and hold up my catch. They cursed me with cold smiles, then politely declined before their children realized I was offering them more heartbreak they’d have to flush down the toilet.


Then, I saw them. A young couple, sitting on the curb, holding plastic bags of water up to the light of a thousand paper lanterns.


The woman hopped up and held out her own bag, eager to compare our catches. They had turtles. Perfect. Getting turtles at a festival is even more irresponsible than getting fish. This was my moment. I held my fish to my chest, then extended them towards her. From me to you. She scratched her head, careful not to mess up her perfect hair. I repeated the gesture, gave a little bow. Thank the Kami. She understood.


She slowly reached out for my bag of fish. I shoved them into her hands, desperate to be rid of the commitment and the guilt I’d feel at their eventual death.


“Arigato Gozaimas!” I yelled, and got the hell out. I glanced back and saw her boyfriend staring at the fish, terrified of all the time and money the little bag implied, of all the work and energy I had escaped, then I lost them to the paper lanterns and silk.


We stumbled back to the hotel, carefree, drunk on irresponsibility and “The Extra,” glad to have experienced Kyoto, and glad to leave. Joe Darris currently lives in Japan with his wife where eats weird things, drinks too much, and generally makes an embaressment of himself. If you enjoyed this story please +1, share and subscribe for more!
Posted by J. Darris Mitchell at 5:00 AM