I Risk my Life with a Duel-Bladed Barber.

I have an unnatural fear of barbers. Just the thought of sitting in that swivel chair, draped and unmoving while the barber hacks away at me with hinged razorblades fills me with dread. For years I’ve been going to my sister-in-law’s salon. Carla’s awesome. She knows what I want (shorter hair) and never makes me explain how to cut it. Still, going there is a harrowing experience. Techno blares, fashionable women eye my unkempt appearance, and the owner offers my coffee drinks I can’t pronounce. Sometimes in desperation I go to Bird’s Barbershop. They offer you beer while you wait and I always need a drink during stressful situations. I even got to know a barber there that I liked. He knew how I liked my hair (shorter) and we were both very comfortable with not talking.


But then I moved to Japan. Goodbye Carla. Goodbye quiet barber.


My hair was already too long when I got here. It’s barely been two weeks here and already I look like and Australopithecus (it doesn’t help that everyone around me looks so damn put-together).


I decided to go the nearest spinning blue and red pole I could find. I figured if the haircut went well, it would be easy to come back, and if he suffocated me with aftershave or drowned me in one of those hairwashing sinks, Raquel wouldn’t have to travel far to enact revenge. I parked my car, stifled the urge to vomit, and walked in. The shop was decorated with two barber chairs, a few plants, and a collection of miniature race cars.  Convinced it wasn’t a salon for old ladies, I politely yelled, “Sumimasen!”


The barber emerged from the back of the shop, like a demon summoned from beyond the Seventh Gate.


“Sumimasen,” I said, much more meekly this time, showed him a picture of my head with shorter hair, and pretended my fingers were scissors.


He looked at me the way a master sushi chef must examine Fugu before he risks his diners’ lives and filets it for them to eat. I understood. I’m a hairy man. I’m not ashamed. I have chest hair, back hair, arm hair and toe hair. There’s hair on my ass and hair on my knuckles. In Austin my beard won the 6-month sprint division at the annual Come and Shave It facial hair competition, which basically means, I am way too hairy.


After a long moment he nodded. Hai. I sunk into one of his swivel chairs, and he began.


First he draped me in plastic (think Dexter), then extended two horrifying stirrup apparatuses. I thought of my wife’s descriptions of visits to the gynecologist and I stopped breathing. Was he going to probe me? Maybe at Japanese barber shops they didn’t stop the haircut at the neck, maybe they did the whole body at once. I hoped I had clean underwear.


Thankfully there was no probing. He got to work, and the little depression had made slowly filled with hair (who wants to see hair on the floor of a barbershop?). Like many Japanese crafts, his work was meticulous. Everyone in our neighborhood has beautiful gardens with manicured trees. In the city, I rarely see the majestic shade trees so common in every American neighborhood, those exist at temples and on the mountains. All the neighborhood trees are trimmed constantly, so they look like stunted old men. Each tip of each branch is cut with a pair of shears, one by one, so they tree never appears unkempt. My barber had the same zealous OCD. Inch by inch he worked, never moving on until that region of my scalp was finished. In America I think we tend to work in broad strokes, then refine the work afterwards. In Japan it seems to be about painstaking perfection one snip at a time.


The haircut was going well. No major arteries had been severed. He hadn’t removed my oversized ears. I couldn’t compliment his work because I can’t speak Japanese outside of bars, so, naturally, I began to grunt.


Grunting takes some getting used to. At first it can be off-putting. I’ll be telling someone a story, and my victim looks away and grunts. At first I thought I was boring them, but that’s not the case. It doesn’t matter if I complement the deliciousness of a meal or talk about Godzilla’s atomic breath and it’s relation to the Atomic bomb, my conversation partner stares into space and grunts. It seems like I’m being ignored, but really it means they’re politely listening. It’s considered aggressive to maintain too much eye contact, and grunting shows you’re paying attention.


I was definitely paying attention to the barber, so I grunted like a pig in slop. He seemed to appreciate my grunts, and smiled. He finished up, held up a mirror for me to see the back of my head and asked, “Neck shave?” I accepted, otherwise not only would I sound like a wild boar, I’d look like one.


To my dismay he whipped out a straight edge. Where was the electric clipper with its plastic guard to protect me? Oh god this was the moment. He’d spared me thus far because he liked his victims to be well trimmed! He clearly had a sick fascination with cleanliness. He was going to wrap me up in the plastic he’d draped me in so when he slit my throat, my blood wouldn’t leave any evidence.


I closed my eyes, and said farewell to the world.


I felt the blade scrape against the back of my neck as he plotted how to begin the mutilation. Would he go straight for the carotid artery or was he a windpipe kind of guy? Maybe he’d just sever my spine so I I’d be paralyzed while he hacked my body to pieces.


The seconds ticked on, my death loomed closer. Was he wiping shaving cream on his towel, or was it blood? I’ve read that there’s blades so sharp you don’t feel them cut you. If those exist, they exist in the land of the samurai.


I politely declined the shampoo (it wasn’t too late for him to fill the sink with hot grease or hydrochloric acid), paid my tab (careful not to tip, tipping is rude), and bowed my thanks for the haircut, his English abilities, and my life. He bowed deeply, so I bowed again. This seemed to distress him so he bowed once more, very seriously this time. Fine. I still don’t get the bowing thing, so I smiled and left.


I got back into the car and looked at my haircut for the first time. I can never really look at my hair inside the barber shop, even in the States. I always just tip generously and get the hell out. 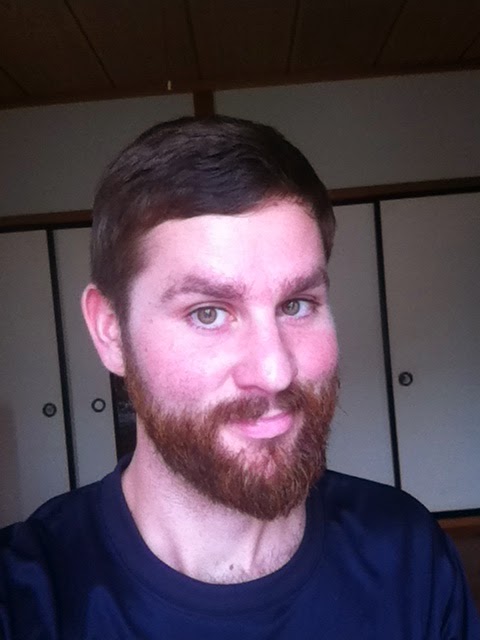 He did a fine job. I’ll probably go back in a month (who am I kidding? More like three) because at least I won’t have to explain how I like my hair.
Posted by J. Darris Mitchell at 7:01 PM