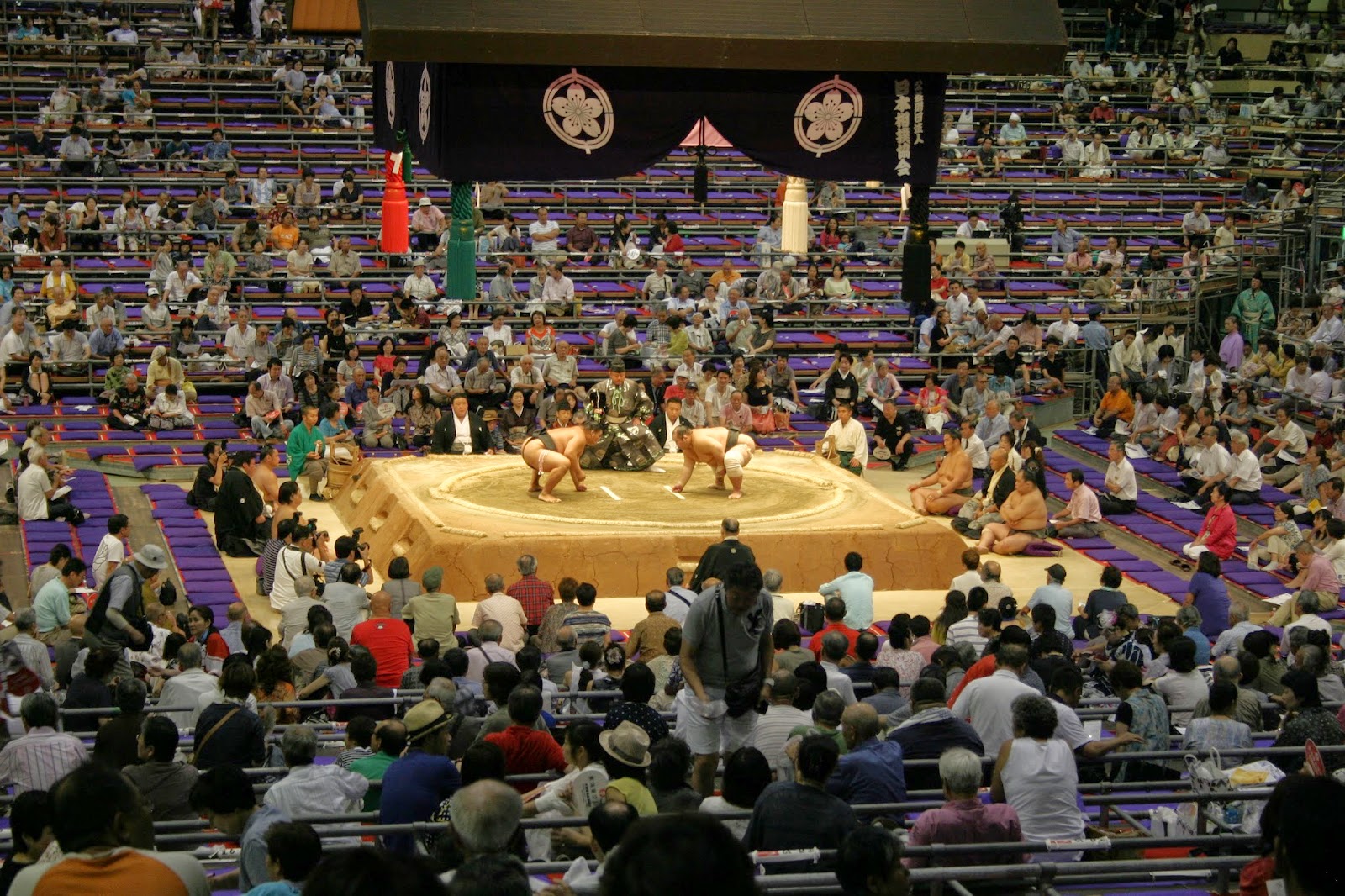 A Shinto pavilion hangs in the air above a ring of straw, buried in 2 feet of clay. Two hulking men, wearing only silk mawashi beat their chests and hurl salt in the air. Another man, dressed in an elaborate silk robe armed with a sword and fan waits for the men to lunge at eachother, and for a fingernail or a follicle of hair to hit the sand.


According to the pamphlet I purchased, the Japanese people wouldn’t exist if not for Sumo. The Japanese won their island when the god Takemikazuchi bested another rival tribe’s leader. Legends aside, Sumo dates back 1500 years. Sumo is the oldest unchanged sport in the world, rivaled only by another of my favorites, the Highland Games. The Superbowl hasn’t even around for 50. Shit the Olympics have only been around since 1896, and they’re always changing the events. Sumo wrestling has more history than most governments. Sumo has changed its rules less than most religions. Nearly every breed of dog, cow, and chicken have existed for less time than Sumo wrestling.


So, steeped in history, I arrived at the Sumo Tournament in Nagoya in awe.


The tournament was inside an air-conditioned stadium, so maybe it’s changed a teensy bit. We arrived early to find skinny rikishi grappling in the ring. These weren’t those goliaths you know from tattoos and the Jackie Chan Adventures cartoon, these were skinny dads and fat college drop outs who just loved to wrestle. They didn’t throw any salt or stomp around the ring. Their referee wasn’t even allowed to wear shoes. These were the up and comers and the old timers who either never made it big or joined too late to have time to build the physique of a master rikishi, the yokozuna.


There have only been 71 yokozuna, or Sumo masters since the title was created, sometime before 1749. The title of yokozuna, is older than the office of the president of the United States (The history of Japan never ceases to amaze me). Since 1909, the only way to become a yokozuna is to win two tournaments back to back. A difficult task made nearly impossible by the other prizes rikishi vie for. Rikishi can earn another title, sort of like streak-breaker, if they beat the last guy who won and the current yokozuna. So not only does the rikishi have to win one tournament, he has to win the next, with 41 boulders of muscle trying to throw him to the ground. But once a rikishi becomes a yokozuna, nothing can take that title from him. If he begins to lose, he is expected to retire from Sumo.


Currently there are 3 yokozuna. So we’re in a golden age of Sumo, at least that’s what Ko said, the man who sat down next to us with his wife and son. He vanished after a moment and reappeared with three skewers of tender chicken. One for his family, two for me and my wife.


“Do you like chicken?” he said in American sounding English.


“I do like chicken,” I said, pulling my eyes away from the ring. The big guys were coming in, the Makuuchi, the 42 rikishi who are currently the very best Sumo wrestlers in the world.


“Ah,” Ko pushed the skewers of meat towards us. We did what we thought was polite, and took one to share. It was delicious. Tender, sweet and salty. Think the best teriyaki you’ve ever had. I wasn’t missing nachos just then.


Ko was confused. He stared at the uneaten yakitori, then at me. I looked at him, then the chicken. Tensions rose. I’m not eating that! I thought. Ko looked from the chicken back to me. That’s for your family!  I looked from Ko’s eyes to chicken. Eat, EAT DAMN YOU! Ko finally ate the skewer. Thank god. We’d stuffed ourselves at the train station earlier. Still, we’d made enough eye contact to last a life time in Japan, so we were fast friends.


Ko’s grin was so big it spread off his face, “Yes, you could say I like Sumo…” he proceeded to tell me if its history, its strongest players, the current up and comers, home town favorites, as well as which wrestlers he didn’t care for and why. He’d studied English in Chicago for three years and I’m pretty sure he bought us that yakitori so he could talk about Sumo and practice English at the same time.


The crowd cheered and we looked up from our beers.


“Eh… that’s Endo. He’s a crowd favorite, but I like Tochinowaka,” Ko said.


Ko tried to explain that he’d joined the sport late in life, after college, and was pursuing his dream at all costs, something the Japanese truly admire, but his wife cut him short. “He’s handsome,” she said with a smile, and went back to watching the match. Ko lost his wind. She must have been right. Endo won and the crowd went wild. Yay for pretty people not figuring their life out right away!


I pulled out my camera and asked if Ko knew this wrestler was. 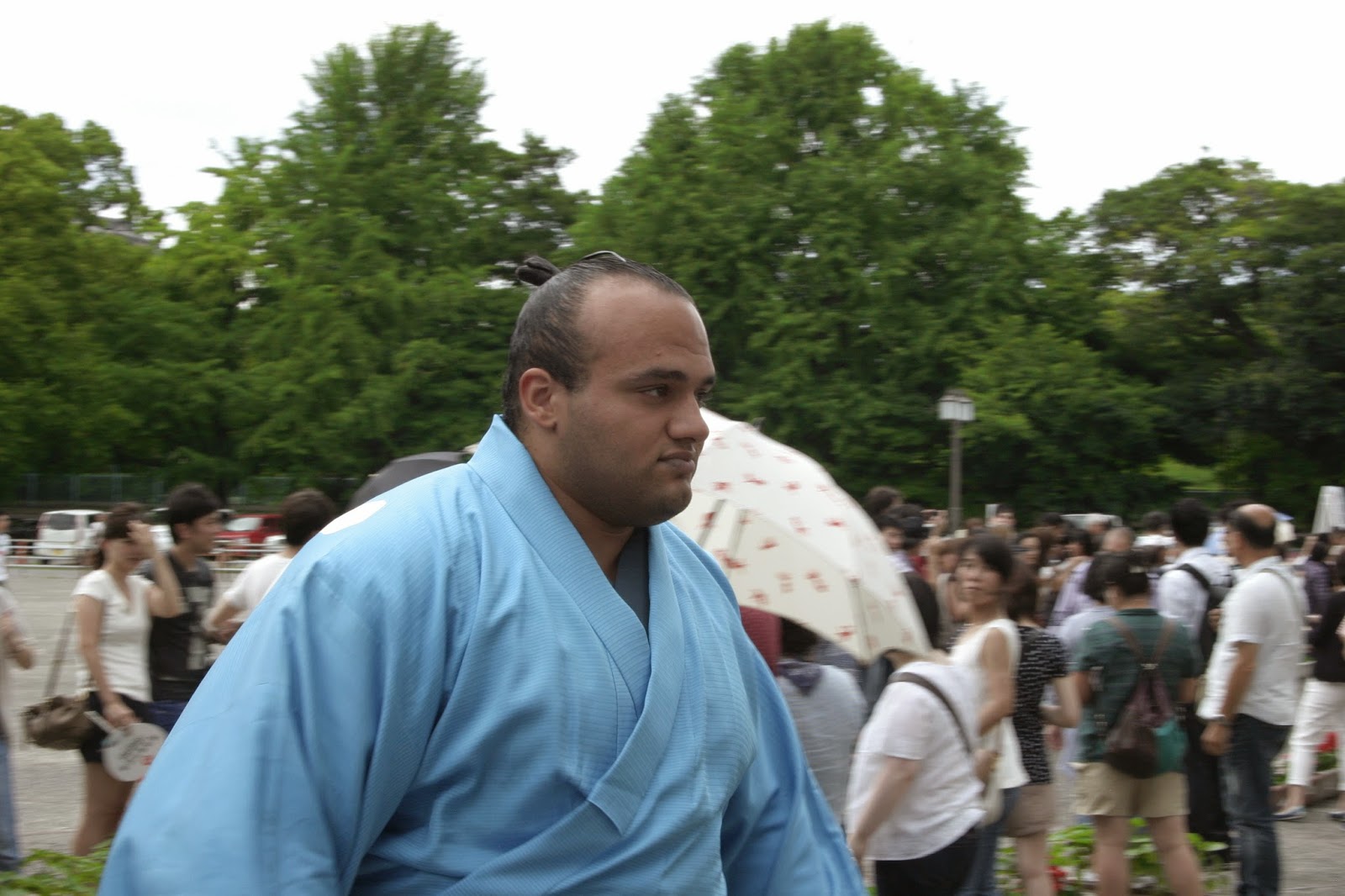 
I had been taking pictures of the Makuuchi entering the stadium. They were stoic, unstoppable forces. I got the sense that if a puppy fell in front of them they’d rather it crush it than break stride. Osunaarashi was different. Like a scene out of a bad movie, a woman dropped her handkerchief, and with a smile and the flick of his wrist Osunaarashi returned it with a slight bow. That was very un-Japanese of him. He outranked everyone there except for the yokozuna.


“He’s only twenty-two, but has already defeated a yokozuna this tournament, he has real potential, but needs to refine his skill.”


Alright! He was a lover and a fighter.


Raquel had her sights on another. She came back from the gift shop with a towel of her favorite rikishi, the yokozuna, Hokuho.


“Why did you get that?” I asked, already offended she wasn’t supporting my boy Osunaarashi,


“Because I asked the vendor who was the best, and she said. Hokuko. Hokuho Ichiban! Hokuho number one!”


I admitted that was a compelling argument. Still I had my loyalties.


The tournament continued, the matches nonstop. At one point I met Santa Claus. He was there to get on TV. Turns out he’s British, lives in Japan, is a drinker and avid youtuber, and said I should start a channel.


“You’re good-looking. You could be popular.” I guess that means I’m on the nice list. When I told him I had a beautiful Latin wife his jaw hit the floor.


“She should have a channel. You both should be telling everyone what its like to be here!  You even have the multicultural angle.” Thanks Santa. Advice taken.


Soon only two matches were left. Raquel and I screamed like banshees.


Osunaarash was up against the yokozuna Harumafuji. They entered the ring and stamped about, pausing only to slap their chests and glare at eachother. The first five minutes of any of the Makuuchi matches are spent displaying strength and intimidating the other rikishi. Osunaarashi knew his stuff. His leg lifts were high, his chest slaps painful. Harumafuji had a better salt toss, but Osunaarashi’s didn’t look half bad. They each ran to their corners and wiped themselves down. It was time.


The match begun and was over before I could blink. Harumafuji started with a powerful lunge but my boy was ready, and deftly stepped aside and pushed Harumafuji to the ground.


Only Hokuho remained. Raquel screamed until her voice was horse. The only person more excited for the bout was the six year old girl behind us.


The yokozuna didn’t disappoint. He easily outmaneuvered Kaisei and had him down in the sand in seconds. It was a great night. We walked through Nagoya back to our hotel, having more fun than I thought possible at a sporting event, and we even go to take a rikishi home. Though I don’t like the idea of him touching Raquel when she gets out of shower.
Posted by J. Darris Mitchell at 5:00 AM