Takayama Can Rock and Roll

Sometimes, even in Japan, the best things are in your hometown. We went to a concert in Takayama, and it was awesome. Concerts in Japan seem to be mysterious gatherings only for the invited, much like Shinto rituals in the states, they just don’t happen that often. But, being from Austin, and having not realized how much I was taking live music for granted, I lunged at the first opportunity to go to a concert.


Well, more like was gently nudged. Our landlord dropped off a flyer, Raquel showed it to our coworker who translated it and showed us where the place was on a map. And people wonder why I’m not learning Japanese. It’s because the Japanese are so damn accommodating, what’s the point?


We were going to go with a friend, but he bailed at the last minute, sighting the ever popular (and honest) excuse: laziness.


The show ended at 4:30, so we ventured out in the early afternoon, loaded down with potato chips, and six pack of beer. As in everywhere, ever, its good practice to bring beer. Even our coworker said that we could, so I was a little dismayed when no one was drinking. Not that I wouldn’t drink alone, but still, I already stick out, might as well not be for the wrong reasons.


We sat down on the dewy grass and took in the show. A chick was singing and the crowd of perhaps forty people were swaying their arms to the music. A young woman offered us a Disney waterproof blanket to sit on (they’re weird about water over here) and I tries to reciprocate the kindness by offering her and the gnarly old man she was with a beer. He looked at me like I’d dropped LSD in his glass.


Ah yes, of course, there’s zero tolerance in Japan , and they mean it, so that makes sense, but surely she can… but no, that wasn’t happening either.


The young woman was most likely his daughter, and probably seventeen. I can’t tell Japanese age worth anything. The women all either like 7, 27, or 67. The men either 15 or 55. They’re always shocked to discover that a 26 year old lives under my beard, so hey it’s a problem for more people than just me.


The next band was wearing Hawaiian t-shirts except for bassist, who looked like one of their dads (they weren’t young guys either, definitely closer to 55 than 15, but the bass player, in his striped golf shirt and khakis looked well past that). They exclusively played classic rock. The lead singer gave long explanations of the historical significance of each classical composer, be it the Stones or Bad Company. He slowly took of layers of clothing to reveal a “Good Morning Vietnam” T-shirt. “Baby it’s all light now… baby it’s all lllight now!” Dude was badass.


The MC’s told jokes between sets. The guy wore a traditional Japanese yukata (looks like a dress to you Americans) and the girl wore floral capris pants and a t-shirt in bad English. They were pretty punk rock. I didn’t understand a word they said but they had the crowd howling with laughter. Damnit I need to learn Japanese.


It began to sprinkle, and we promptly abandoned our Disney water proof blanket, and returned it. This was good timing, because the gnarly punk rocker and his daughter has seen me guzzle a couple beers at this point and the rain was a good alibi to return their blanket and seek drier ground. The Japanese hate getting their hair wet, so it made sense for us too to fear the drizzle.


Sure enough, everyone whipped out tiny towels they draped over the feathered locks. But they all matched. Everyone had the same tiny towel “TaruiBand” it said, in a font I would describe as Major League Baseball. I wanted one with all of my heart. I poked around, while the next band played. I passed stands serving traditional Japanese food like dangos and microwavable pizza cooked in a woof fired oven. But, fruitless, I went to watch the punk rock band called PsyRanger that were fucking radical. We bumped into one of our students moms and she knew the bass player.


“What is this song?” I asked, hoping her poor English would mask my slurred speech.


PsyRanger is awesome. The two lead singers, a dude with hair like a Sayan and a woman who looked like she could seduce the emperor then slit his throat took turns belting Japanese over heavy metal riffs, power chords and power pop melodies. Awesome band, but I still didn’t have my towel.


The penultimate band, M. A. D., played more classic rock songs. Shameless rip offs of Led Zeppelin riffs with Japanese sprinkled in for the locals. They were great, their guitarist especially knew how to melt faces.


But they paled compared to the last man to go on stage. I’d seen him hanging around the crowd. Dressed in a full suit on a sticky August day, surrounded by a tough looking posse and a couple of girls that after my last encounter I could only assume were his daughters. They all marched him on stage after the band tuned up, and he proceeded. To. Rock.
They (he?) was called Taruiband, and not since I saw James Brown play at the County Fair have I been so delighted to dance and giggle with a performer. The crowd agreed. What had been a loose collection of grandparents, grandkids, young hipsters, bikers, and punkrockers, coalesced into a crowd bent on the boogie-woogie with Tarui. He twirled the microphone, had a costume change (black suit to red suit during the drum solo) and had two hip hop dancers that were definitely not 27. The crowd threw their towels in time to chorus while a kid in the front row kept the bubbles flowing. 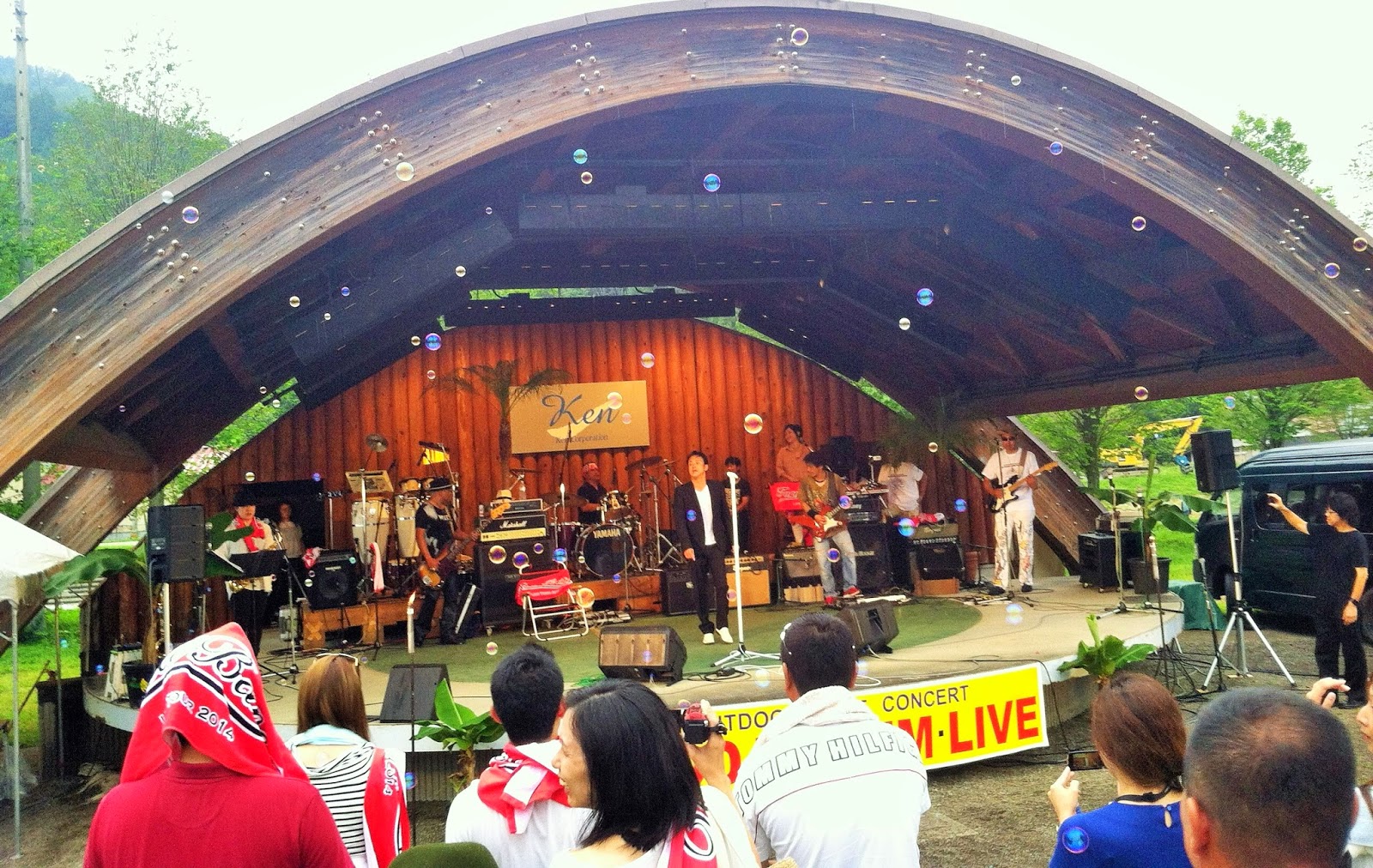 How many towels do you see? Notice the guy to the left is protecting his hair.

It was a great day, and after drinking the entire six-pack (despite Raquel’s scowls), I was hell-bent on getting one of those towels. I asked a man for help, who asked the woman next to him, who scurried off towards the stage. I stumbled after her, only to have the bassist snort and toss me his own towel. Here ya go, kid. His eyes said with contempt, but he smiled. We made it to the car before another man caught up with us and gave us another towel, while he apologized of all things.
Seriously, why learn anything when they’re so damn nice? 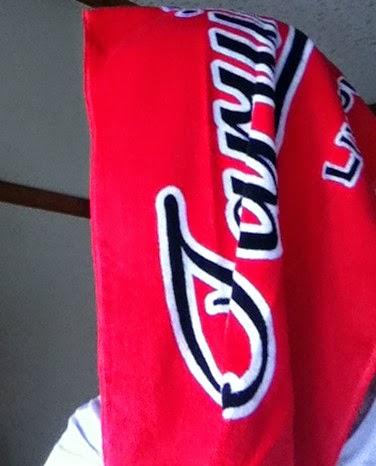 Joe Darris Mitchell currently lives in Takayama with his darling wife, and is shown here wearing his beloved Tarui Band towel in the traditional Japanese fashion, on his head. If you enjoyed this post, please +1 and share with your friends! Check out @joedarris on Instagram for more pictures of Japan! ﻿
Posted by J. Darris Mitchell at 9:43 PM