The last few days in Takayama have been defined by water. It has been raining without end for a week, and yesterday parts of Takayama were almost evacuated. Announcements played on the city’s alarm system all day long, only one of which was in English, and shared the contradictory advice of staying in our accommodation, and making sure we had enough food to last a week. We did what our neighbors did, waited for a break in the rain, rushed to grocery and stocked up nonperishables like potatoes, onions, and rice.


We made a video on youtube during the storm that (lucky for the footage) was shot during the absolute highest the river got. The rest of the week wasn’t nearly so terrifying, but water was always on my mind. I’ve been reading The Secret Knowledge of Water by Craig Childs, and have been thinking about Childs’ argument that something’s absence increases its value, like water in the desert. I’ve tried to fight that idea. It rains a lot here, and the Japanese are aware of the bounty of water. They take enormous baths nightly and water their gardens and rice paddies from the streams that run alongside every street, but I’ll admit Childs has a point. After not seeing the sun for days, when it poked through the clouds, we raced outdoors for a hike in the sun.


We left Takayama on highway 158, took a left on 73, and after about 30 minutes, parked at the noodle shop that marks the entrance to the Ookura waterfalls. Our car was the only one there. We blamed the late hour and giggled like teenagers who snuck into a movie to find the theater empty. Really, it was probably the rain. It was only sprinkling then, but with all the water that had been coming down, it’s a miracle that none of that path had been washed away. Part of me wonders if we saw some of those waterfalls for the first or last time. Enough water fell here to move boulders. The waterfalls might have different identities.


But I wasn’t thinking any of that as I followed Raquel up the mountain into a magical forest filled with signs warning us of bears. Raquel was conflicted, she knew we needed to make noise to warn the bears (not scare them, I don’t think bears know fear) but didn’t want to scare away the other animals. I just wanted to see a bear, so remained ominously silent until we spotted our first waterfall and was moved to words by its beauty  . 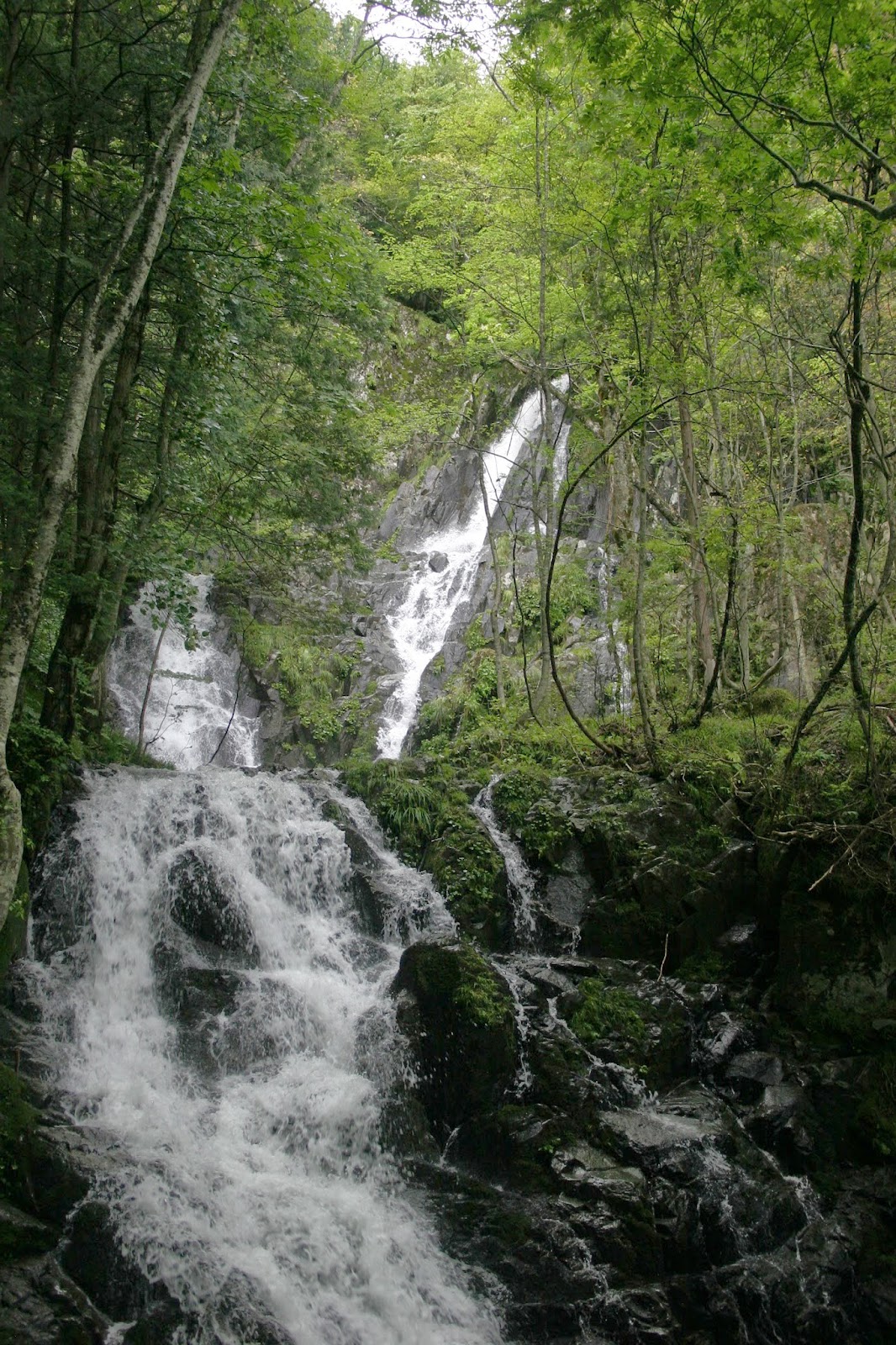 
We giggled some more, laughing at how foolish the island of Japan was for not sending any visitors to bother us as we explored. Up and up we climbed, each waterfall more marvelous than the last. We were giddy from their beauty. Even after days of unending rain, water is still gorgeous. Near the top, the mist of the largest waterfall in view, we decided to skinny dip in one of the pools. Well, really I decided.


“What about the…” Raquel tried to protest, “animals?” she finished lamely, and stripped off her clothes without further argument. We splashed around the mountain pool, daring something, anything besides the mountain stream to see us, but nothing did. We got dressed and climbed to the last fall. It was beautiful, and twenty meters beyond it lay a parking lot and a road for those who wanted to skip the dangerous hike or spy on skinny dippers. Mmm… so maybe I didn’t pick the best spot for our swim.


We walked down the winding road, looking for animals. We saw one enormous butterfly that took flight as we approached. I’ve been desperate to see animals, even a butterfly, and Raquel was whimpering as it flew away, so I exposed myself for the second time that day and peed in the road. I’d read urine attracts butterflies, I swear. But this one hadn’t read the same National Geographic article and flew out of sight, probably seeking drier ground.


At the bottom of the hill, I spotted a baby wild boar, scurrying from bush to bush.  I would’ve followed it back up the mountain to get a photo, but Raquel was terrified. “Where’s its Mama?” Genuine fear showed in her eyes, so we got in the car and left. Good thing too, the rain started up again and wouldn’t stop for another three days.


Childs won again, for when the rain slowed down Saturday night, I embraced its absence, and took my bicycle to the streets.


Raquel was not as enthusiastic. “It’s raining.”


It’s barely misting! I argued, desperate for my wife to accompany me downtown.


Two months in a new climate and my entire viewpoint is changed. It was raining hard enough to keep me inside watching cartoons in Austin, but here I donned a light jacket and my crocs, boasted I’d see her when the sun rose, and hopped on my bicycle.


And that’s how I found myself alone, trapped by the rain, and having a miserable conversation with a Brit obsessed with him or herself (I honestly couldn’t tell). I had already watched in terror as the Brit drove away the local sitting between us with tales of his/her awesomeness.


“I’ve road my motorcycle in Southeast Asia and Africa. I’ve seen more of America than most Americans. You know only fifteen percent of Americans have their passport? What do you think of that?”


Well I’m currently living in Japan, so I don’t know if whatever point you’re making applies to—


“Some bloke with a gun in America fixed my motorcycle. Isn’t that awful?”


What’s awful is how the cops are armed like the military in America. They’re firing teargas at civilians in Ferguson—


“Yes, so I heard, I just don’t see how a young man getting shot by the police is news.”


When s/he turned around to bum a cigarette from the Germans behind him/her, I snuck out, rain be damned. I didn’t want to be followed to the next bar.


I walked into Desolation Row with a grin. I’m one of the regulars, and it being a not-so-rainy Saturday, I was expecting to drink late into the night without my woman around to ruin my manly fun.


Instead the bartender greeted me with, “Where’s Raquel? I’ve never seen you alone before. It’s kind of weird, you know?”


I agreed, yes, it was weird, but it was raining, so here I was. I looked for a buddy to share a beer with and saw no one. So I sat down next to a Japanese woman at the bar. She introduced me to her two sons, her sister, and her mother, who protested her name and insisted I call her by her title “Baba,” Japanese for grandmother. Once I got that straight, Baba flexed her muscles and explained really she was Baba “the Boss” Yamazaki. Baba had permed curly hair, enormous sunglasses and proudly declared herself 72 years old as she downed another shot of tomato juice. The Yamazaki family had been drinking together since six, and Baba was quite proud that one her grandsons could still stand (mostly) straight.
The family watched in amazement when I pulled out my tobacco pipe and lit up.
“Can I try?” asked Yoichi 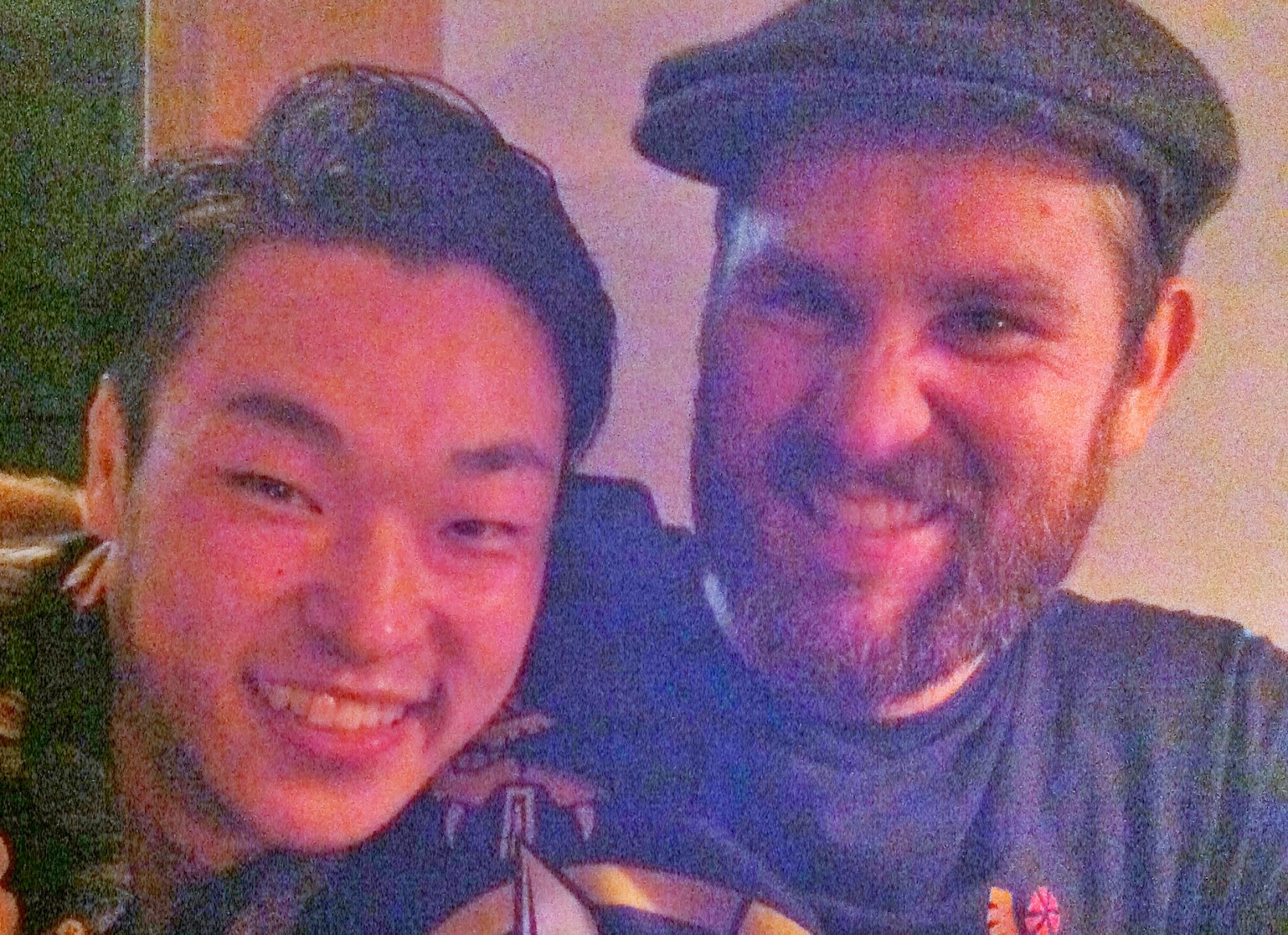 Yoichu, youngest and most sober in appearance of the Yamazaki clan, known as the "Iron Liver."


I passed him my pipe, and before I knew it, the entire family had taken a puff, Baba included. This seemed to do the trick though, for Yoichi declared he was tired, and when Baba “the Boss” agreed the family left for warm food and dry beds.


I left shortly thereafter, and made it home well before my curfew. Lucky I did too, for the rains started in earnest, and didn’t stop until this morning. The rivers almost came out of their beds, and our neighbor never left their banks, telling anyone who walked by if the water level had gone up or down.
Now the sun is shining, the summer heat has returned, and the river flow has ebbed. I think Childs is mostly right, after not seeing the sun for a week, I want to embrace it, to lay out in the heat and just sweat. Something’s absence does make us appreciate it more, but I don’t think that those in the desert respect or fear water more than the rest of us. We felt its presence here, its weight in the mud clinging to the mountain above us, its hunger as it washed trees down the river and even its incessant plinking on our roof filled us with apprehension. Water is too powerful to ever be ignored. In Japan it sculpts the volcanoes, stops the shin-kan-sen and releases nuclear radiation. Water sculpts everyone everywhere. We all take turns fearing water and embracing it, and I think we all smile when the sun first pokes out from behind a cloud, and beg for rain on a hot day.

Joe Darris lives in Takayama Japan with his darling wife. If you enjoyed this story, please +1 and share with those who you normally stay dry with.