Japan: Land of the Landlords


There's a wasp nest growing underneath our window sill. We showed our coworker and she examined it, hear face close enough to let the wasps crawl up her nose.
"Oh, those are good ones. They'll leave soon, don't bother Iwayam-san"
This coming from a woman I have seen destroy moths with a broom in one hand and a can of raid in the other. 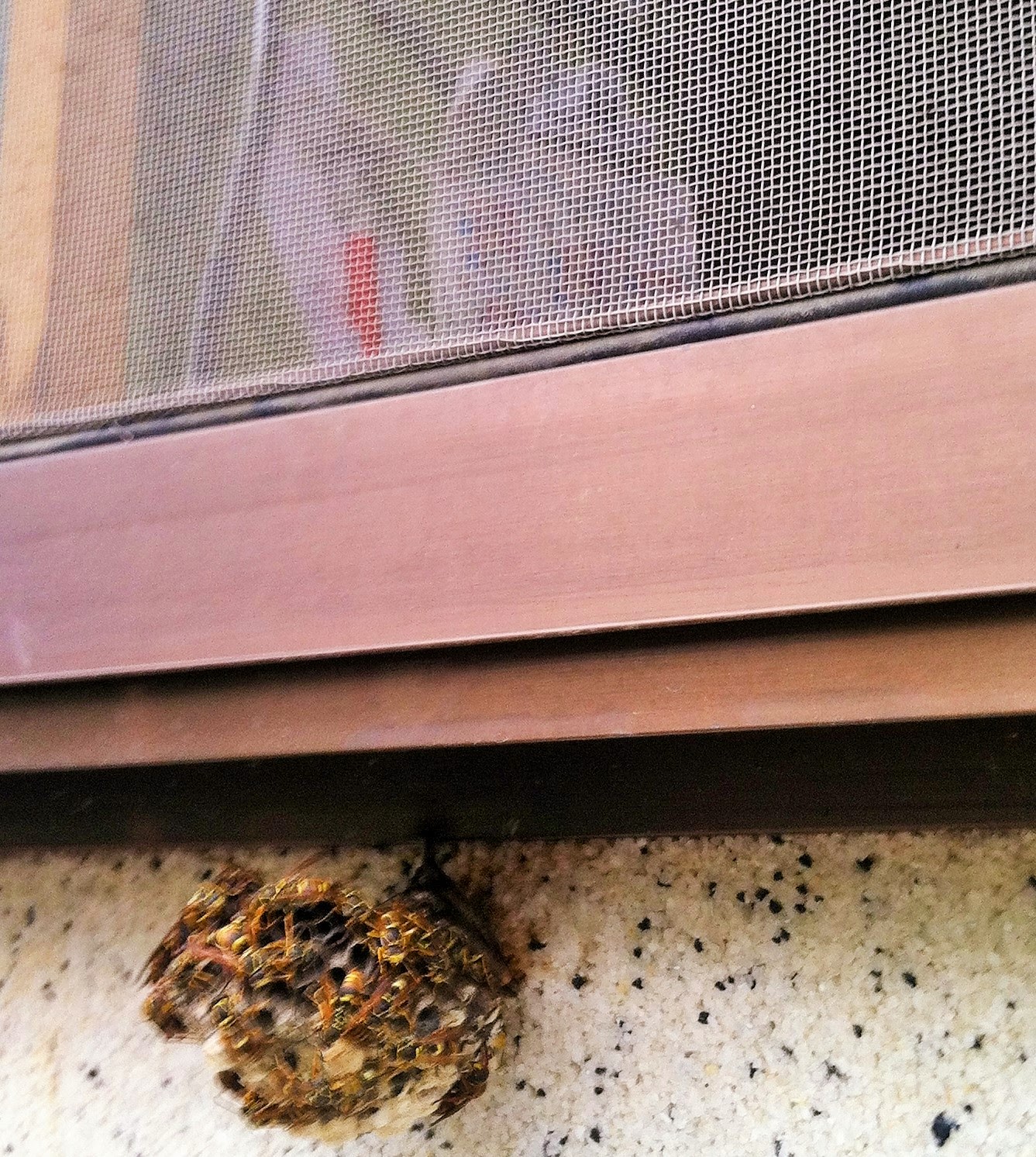 Wasps below our kitchen window. The author apologizes for shakiness of the photo, but being a rational human being, fears these stinging demons and could not hold still for a clean pic.

They view bugs differently over here, but I guess I'll take her advice, our landlord already avoids us needy Americans. Not that I blame him. I made the mistake of asking my landlord how to work the remote for the TV so I could watch the World Cup. After fifteen minutes of fiddling with the controls and mumbling to himself in Japanese, he called for help.
“The TV man can come today?” he asked.
Yeah that’d be great! What time?

Sure, yeah, how soon?

The TV repair man was already strapping on his tool belt and leaning a ladder against the house. I have no idea how he moved so fast. He was a skinny old man, who looked like he’d been working with electronics since their invention. That didn’t stop him from climbing up the ladder, setting a foot stool on the slanted tile roof, and prying open the cable box.

He plugged and unplugged cables and yelled at my landlord in Japanese. My landlord would poke his head out of a different window or door each time and reply in the negative. Undeterred, the old man perched atop his foot stool continued trying connections. I reviewed the steps for CPR in my mind. Step one, survey the scene, if the scene is safe, proceed to step 2. I doubted a tiny man being electrocuted on a metal ladder would qualify as safe but I kept my hands out my pockets and ready to catch him if he died fixing my TV.

The two men yelling at each other through my home was quality entertainment for the whole neighborhood, and soon the owner of the house showed up to enjoy the show from a front row seat. He’s different from my landlord. My landlord is named Iwayama (Iwayama-san to us) and regularly brings us Iwayama-sauce to put on the 94 year old Iwayama-mama’s vegetables. Iwayama-san is one of the kindest and most generous men I’ve ever met. Evidence being how hard he was working for me to watch TV right now.

The owner of the house is a little different. Raquel thinks he had the parking lot repainted because we weren’t parking perfectly and rather than confront us about, it’d be more polite just to get the whole thing redone.

He stepped out of his truck, placed his straw hat on his head, hid hands on his hips, and craned his neck to watch the other two men scramble to get the useless American’s TV fixed. I got the sense the owner looked at my landlord’s inability to fix the TV with as much endearing amusement as Iwayama-san felt towards my own inability to do something as simple as watch TV.


The show went on. The TV repairmen poked around various wires while Iwayama-san poked his head out of various windows. I tried to compliment the owner’s home, but all either of us really wanted to do was watch the other two work and maybe see one of them fall off the house.
Eventually the TV repairman decided it wasn’t the cable, but the TV. The owner vanished and reappeared seconds later with another TV (Seriously I don’t know how they move so fast. Instant Transmission?)
The three men took turns fiddling with the remote until they got it to work. They flipped through the channels, and I quickly realized how pointless this all was. Everything was in Japanese. My brain malfunctioned as I watched game shows about eating Udon and anime about old people and their grandchildren. I had wanted the TV for The World Cup, but that would only be on for another couple of days. I felt terrible, I’d put these men through so much work, and risked one of their lives just for a couple of soccer matches? I don’t even care about soccer!
That was fine with the owner. The mystery solved, he vanished and took his TV with him.
I tried to tell Iwayama-san to forget about the whole thing, but he would hear none of it. He vowed to return a few days later with a new TV.
But I don’t even watch TV in the states, just movies!
“Ah. You need a DVD player as well?”
No, I don’t need a TV at all, don’t worry about it! Please!
Iwayama-san nodded his understanding and returned three days later with a TV he’d found on Ebay, a DVD player, and a Star Wars DVD. I thanked him profusely, as he also brought more vegetables and a flyer of upcoming events. He’d circled which ones he thought we’d be interested in. He nodded a ‘you’re welcome’ and asked, if we need anything else.
Well, my bicycle tires are a little flat.
The bicycle tires are all flat here. In Austin, I’d be yelled at by dudes in jean shorts and fixies for riding 6 psi under, but here flat tires are embraced. It’s maddening, but I was sure that since the house came with bicycles, there had to be a bike pump somewhere. No such luck. Iwayama-san grimaced, then nodded and promised to return.
I sighed. Two points for the useless American! Now I’m terrified to ask him for anything, I don’t want to ruin his fascination of foreigners, but the car is making a weird sound (the last teachers drove it to Tokyo), and there’s slugs in the bathroom.
Aw well. I dealt with worse in the states, I’ll accept fresh vegetables as hush money.

Joe Darris Mitchell lives in Takayama, Japan, with his darling wife and the occasional cricket (he throws them outside if they get too loud). If you enjoyed this post why not +1 or check out his Instagram at the top of the page?