Sports day, like many Japanese obsessions, sounds like something Americans should do better, but don’t. Trains, Bar-B-Q and outdoor sports have always meant America to me, but after seeing how Japan does them, I’m reconsidering.


Sports Day is the day when students compete in three legged races while their parents cheer them on. Except that doesn’t really happen in the States. My parents never made it to a Track and Field Day, they had to work and I never told them about it. But in Japan, Sports Day is held on a National Holiday, so parents have no excuse, and happily show up with pop-up tents and sunblock.


As the resident English teachers, my wife and I were given a second row spot, one table from the principal. The perks were tea, a free lunch, and great seats for the most ridiculously adorable athletic meet I’ve ever seen.


There were sixteen events. Here they are in all their glory. 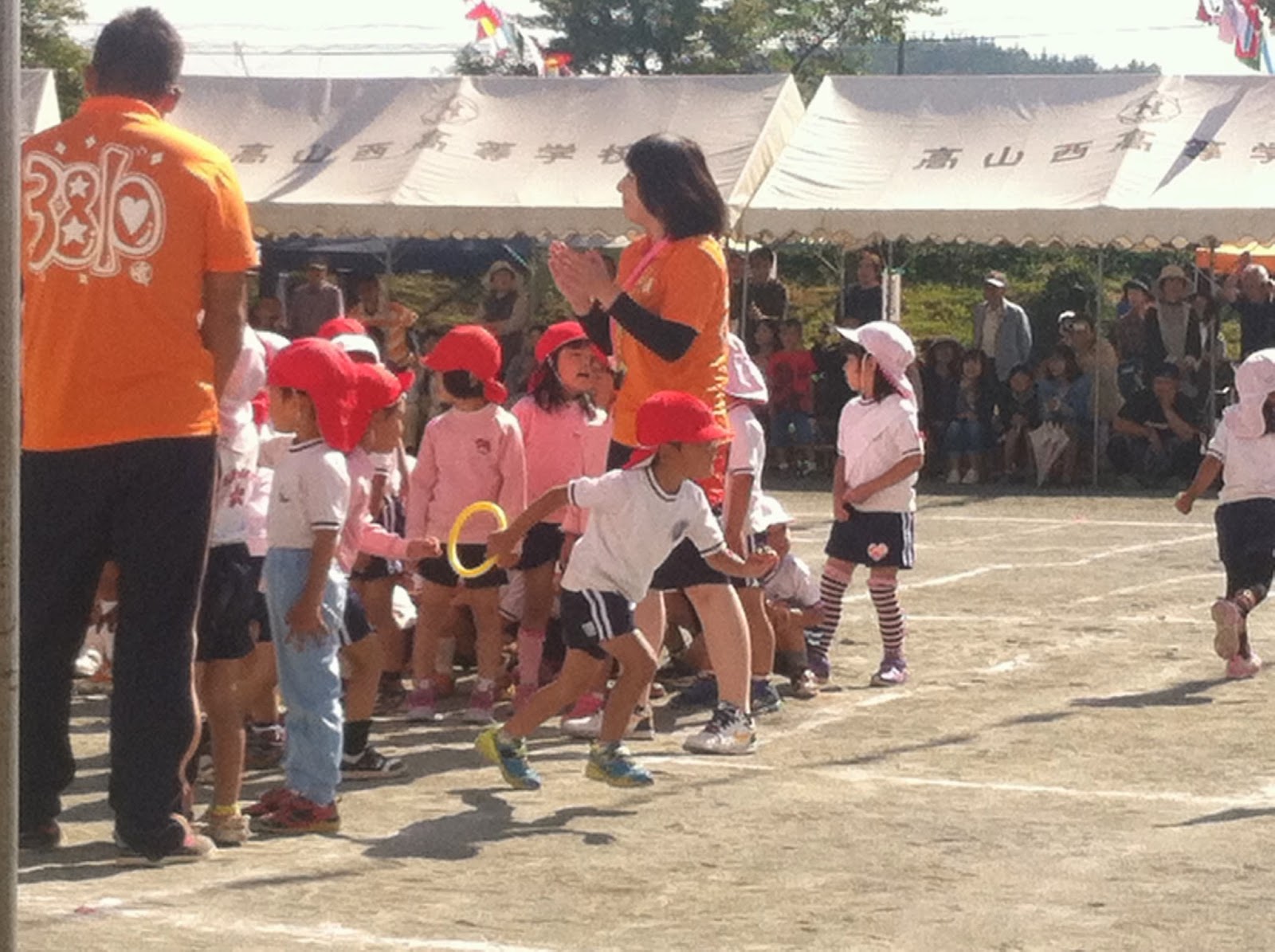 The kids marched onto the field and broke up into teams. With chants of gambare from the crowd, the race began and the kids ran their little legs off. The parents cheered for the first kid to cross the finish line. White team won, much to the disappointment of the Red Team, but the parents cheered just as loudly for the last racer to cross the finish as the first. Gambare means do your best, and giving up, even in the face of an imminent loss, is unacceptable. 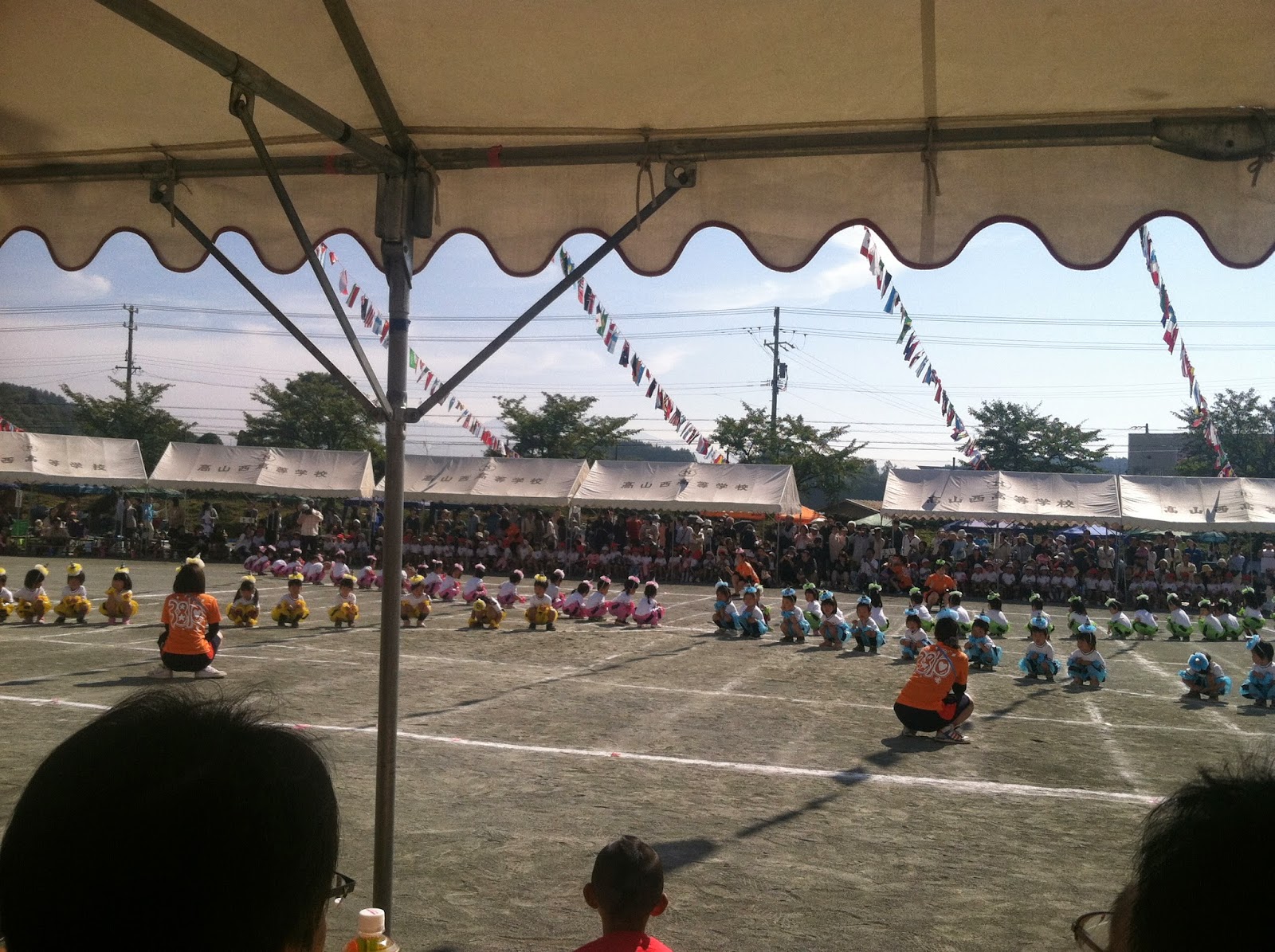 About a hundred tiny children marched out onto the field dressed in different colored garbage bag pants. They wore tiny party hats and bracelets, and Raquel couldn’t stop saying kawai! Or Cute, cute, cuuuuuute! They did their best to dance in time to a Hawaiian surf number (a difficult task, as parents of 3 year olds know). Plenty stared at the clouds and forgot to dance, some stumbled and one fell down and sobbed miserably as he got back up and kept dancing. Gambare little guy. Gambare. 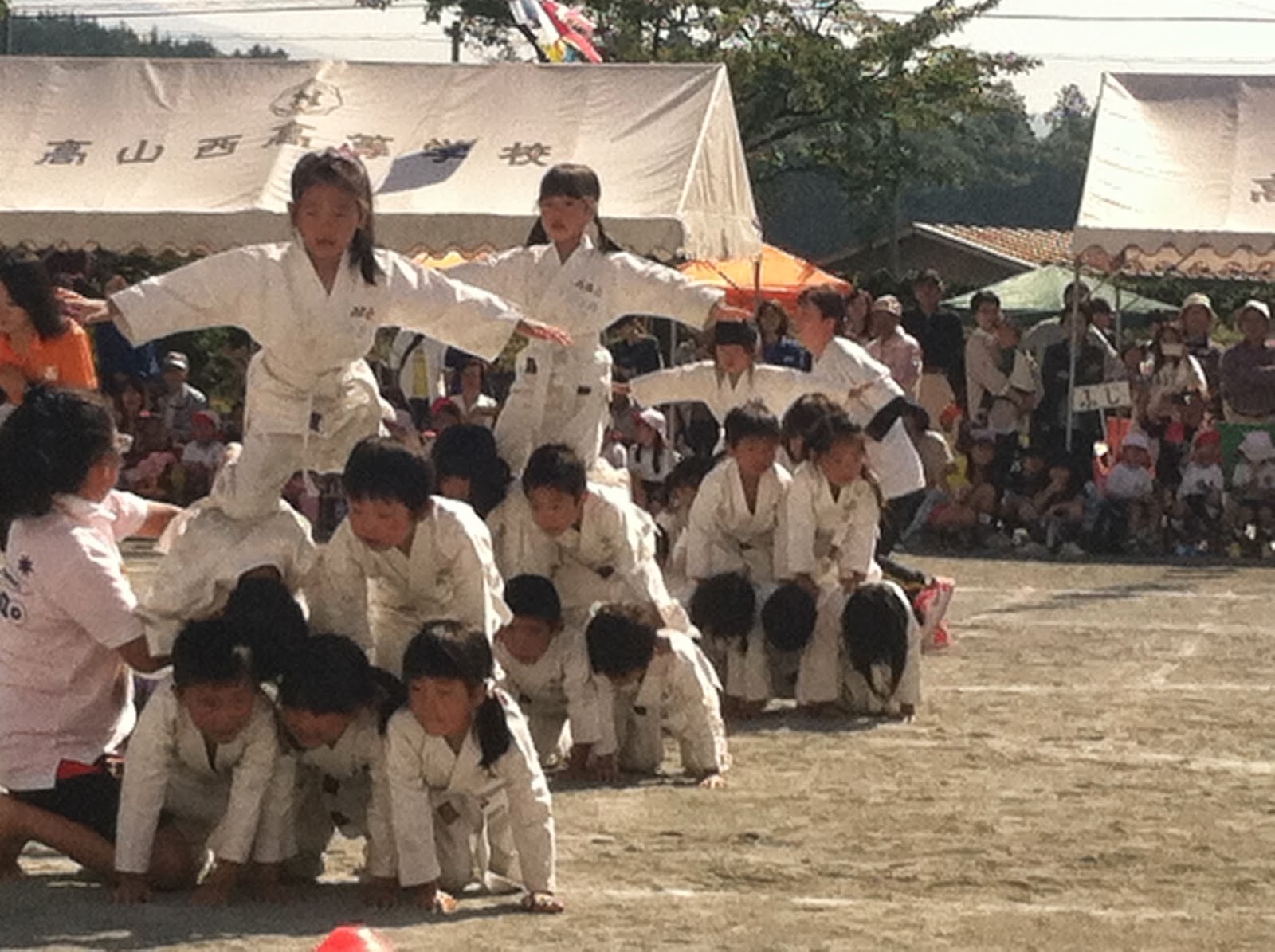 The kids punched the air and kicked invisible combatants in sparkling white gi. But the show got really good when they started doing acro-yoga (I don’t know what else to call it. It’s more complex than human pyramids, but similar. Child stacking?) First in pairs, then triplets, then groups of ten, the kids held each other up higher and higher off the ground. I actually had a student break his arm doing this, and can’t help but think it would never fly in the States. His American counterpart’s parents probably would have sued, and no more child stacking, which is a shame. It is adorable and impressive.

In a heroic show of masculinity, the fathers of the Red and White teams lined up on either side of the field, and stared each other down over the sleeping bags, buckets, tatami mats, and giant foam ball that lined the middle of the field. The gun fired, and these grown men raced to the junk and wrestled it back to their own side. The fighting was so fierce they tore a hole in the foam ball the first round. Gambare is a way of life here. Seriously. Nobody acted aloof or too cool to try. These men were fighting for their children damnit. Gambare!  (check out the video on my Instagram)

Two six year old captains faced off leading armies of children. They tweeted on a whistle, waved a flag back and forth, and a hundred and fifty kids copied their moves or clapped to the beat. It was like something out of a videogame. I laughed so hard it hurt.

Grandparents threw balls in nets to score points for the Red and White team. The referee would blow the whistle to stop and none of them would, they all wanted that last point. It was somehow even cuter than the children competing.  (don't believe me? Watch the video)

The first half of the track was a three legged race, in which the kids tried to run way faster than their dads and busted their butts, then it switched to a wheelbarrow and finally a piggyback. This was a great one to see the parents look a little embarrassed while the kids looked ridiculously happy.

Pairs of a boys and girls raced to a miniature Torii gate, made an offering (an oversized cardboard coin), then clapped three times, bowed and said a prayer, a Shinto tradition. One girl didn’t clap or pray, and the boy she was with (one of Raquel's students) refused to run back with her until she performed the obligatory ritual.

Then came a parade of tiny children that tried and failed to dance to a song about koalas and pandas. Strangely not that cute. The only good part was the one kid who kept trying to escape but kept getting captured by his mom and being forced to keep dancing.

A choreographed dance to Disney music. It was the only event titled in English. I’m still confused about what it all meant.

The teachers chalked a racetrack onto the dusty field. Then a starting line, and lines for the kids to wait. They chalked reference lines on the field between every event, measured with string for perfection. The way they worked was in itself an amazing piece of choreography. Each event had a different set up, yet somehow they never seemed to make a mistake. The older kids took their race seriously, and some were heartbroken when they lost.

Another cutesy race where the parents had to carry the kids in different ways.

This was the event I’d been waiting for. The kids have been practicing it for weeks, usually during my English lessons, and I couldn’t wait to see the final results. It delivered. A six year old stood on the grandstand and conducted the rest of the students as they twirled batons, pumped pom-poms and banged their drums. They danced to Japanese versions of Disney songs (again with the Disney?), and theme song to a popular Anime cartoon. It was glorious.

Dads had to race to a tarp covered in the shoes of all the children and find their kid’s sneaker while keeping their squirming, one-shoed child safely in their arms and off the ground. It was good fun to watch the little girls spot their shoes before the dads could.

The graduates of this prestigious private Kindergarten (mostly 6-10 years old) lined up on either side of a pair of heavy hooks and grabbed hold of two thick ropes. To shouts of gambare, they heaved and hauled until Red finally won, and only event remained.

This was the event I was really there for. When the vice principal invited me to Sports Day, it was really a ploy to get me to run this race with all the moms and dads. Trying hard is really important in Japan, and its important for the kids to see adults trying hard at silly games they don’t understand just like the kids do. Sports Day was great because the kids got to see their families try just as hard as they did. Whether it was Grandparents-ball, The Missing Shoe, or Monkey-on-the-Back, almost everyone really did try their best, not something I often see in America (Most people won’t even dance at a concert because it might look like they actually care too much). I think the vice principal wanted me to run the relay so the kids could see that everyone tries hard in this world they’re going to inherit, even the silly foreigners. Either that or she was hoping I’d bust my ass on the sharp curves of the tiny track like the English teacher did last year.


With all this in mind, I lined up with the other men.


The women went first. Raquel's sweaty brow proved that she gave her best, but it wasn’t enough. Her team had already lost. I vowed not to let the same happen to mine.


I looked and saw the men around me shared the sentiment. What had been a laughing group of loosely organized guys was now four rigid lines of men donning headbands and stretching. I wasn’t going to be the only one to gambare.


We jogged out on the field. There were maybe twice as many men racing as women. Sports Day definitely had a daddy vibe. Lately the Japanese government has been trying to get dads more involved with their kids and these guys were ready to prove their commitment.


The first heat was off and we were all shuffling forward, crouch stand, crouch stand. Finally it was my turn. I ran my ass off. The men behind me was starting to gain, and I threw my legs into overdrive. I didn’t fall on those tight dusty turns, but I came close. I passed the baton and sat down with a bunch of other overly sweaty men. There was no doubt, we’d done our best, and we all congratulated each other as the rest of the men ran their lap. You can watch a video on the joquellives YouTube channel (soon)


And when White won the trophy at the end of the day, I basked in the victory because I knew I had given everything to the silly little race, and I saw that the losers wondered if they couldn’t have given just a little bit more. Giving your best makes victory sweeter, and loss no less bitter, something the States needs to remember. There wasn’t a “good-effort” trophy for every kid on the field, just one big one for the captain of the White Team, and a smaller one for the Captain of the Red, and they don’t even get to take them home. They stay at the school to remind everyone to gambare and maybe, if they work hard enough, they can hold this sweet, sweet trophy while their parents, friends, and sweaty English teacher cheer for them on for Sports Day.


If there’s any event you’re particularly curious to see pictures of let me know in the comments!
Joe Darris Mitchell lives in Takayama Japan with his darling wife, and usually makes a living teaching English, not running laps. If you liked this story, share with your friends and read more about teaching young children in Japan, or drinking shochu with adult students.
Posted by J. Darris Mitchell at 9:49 PM