The Horror of the Lion-dancers

This weekend we witnessed the horror of a Lion-dance festival. Thirty beasts moved in unsettling synchronized steps, then turned their snapping jaws on the crowd. Some of the adults offered their own flesh, but the most delicious morsels, the children, were unwillingly sacrificed to the monsters. Kids watched in mute horror as parents carried screaming children to the jaws of the hungry, dancing lions. Dazed, the children didn’t think to protest until their own parents lifted them and carried them to their doom. They’d scream, punch with their tiny little fists, cry for help, but to no avail. The only escape was through the jaws of one these beasts. The Lion-dancers would nibble at the screaming child’s brains, their parents would laugh and maybe snap a picture, and then the ordeal was over.
Do you want a snack? Parents would ask their traumatized little ones.
I needed this festival. As the trees turn orange, and Halloween approaches, I’ve been feeling a bit homesick. There’s still bags of cheap candy in the stores in Japan, but everyone assures me that, no, there will be no trick-or-treaters. I always hiked miles as a kid, jacked on high fructose corn syrup, daring my friends to go grab candy from the abandoned house with a strobe light flashing eerily, only to pee my pants as a masked killer rushed us from the hedges. Later, too old to trick-or-treat I dressed as a scarecrow on my front porch and grabbed unsuspecting victims or simply hid inside the door, waiting for the perfect moment to strike as my wife doled out candy.  So alas, I was quite sad I wouldn’t get to scare any children this year.
It seems that duty lies with the Lion-dancers.
My first experience with the Lion-dancers was at the kindergarten where I teach. The teachers stopped class and dragged the kids out to playground while the principal locked the doors to prevent the kids from hiding in the building. Six men came out, dressed in traditional Japanese garb. They played an eerie melody on shrill flutes that wormed its way into my head. One child was already crying, and soon the whole school was sobbing. They knew what was coming. Only I was ignorant of the terror. 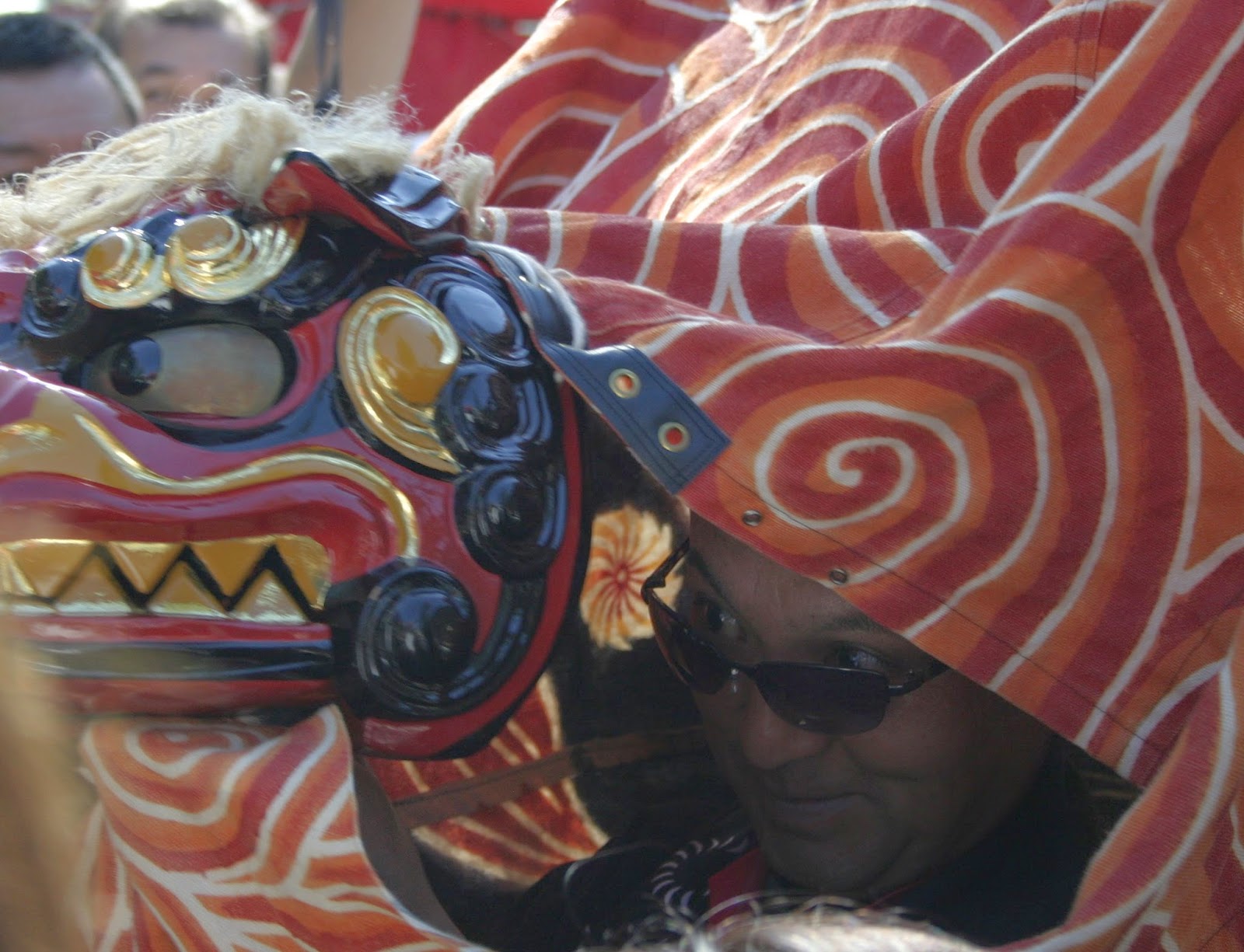 The Lion-dancers made their entrance. As for costumes, I’ve seen far more convincing at Haunted Houses. A Lion-dancer is obviously two men, a sheet, and a red lion/dragon/dog mask with a moveable jaw that one of the dancers snaps in time to the music. The Lion-dancers hopped and their jaws snapped to the beat. The kids tried to scoot away, but their cruel teachers, (myself among them) didn’t let them.
“They’re just people,” I cooed in a foreign tongue.
Then the Lion-dancers rushed forward. The kids ran. Teachers stopped as many as they could. I managed to snag a few and held them down as the Lion-dancers approached, jaws snapping. We took turns dragging the kids forward towards their hungry jaws. The Lion-dancers would politely nibble each child’s skull--melting them into a sobbing wreck--then abandon them for their next victim.
I actually had to teach them English after this traumatizing experience. The kids looked like hell. Their hair was tangled, their clothes dirty from running and falling in the path of the Lion-dancers. They sang the alphabet through tear streaked faces. They needed a nap or a stiff drink.
I told this story to one my most gifted students and she explained the horrific custom. A bite from the Lion-dancers bestows wisdom, so schools hire them to terrorize the children and parents drag their children to festivals to be bitten. Lion-dancers were soon going to visit her high school and she doubted she’d be able to face them. When she was little, a Lion-dancer came to her door and chased her through her house until it cornered her under her bed. Her parents dragged her out and offered their screaming child to the monster. This student is seventeen years old and she’s still terrified of the things. The terror of the experience must be proportional to the intelligence bestowed, because she’s one of my brightest students, and I have heard no story more terrifying.
Back at the festival, the Lions left and were replaced with a slow procession of children. They moved across the stage in a hypnotic dance. There were tiny girls in kimonos, boys with spears, hammers and umbrellas, and samurai. After the trauma of the Lion dance, their performance was relaxing and absorbing. They moved with the surety of tradition, each verse another step in their dance.
These weren’t the same kids whose parents drag them to these festival. These were performers, a part of the festival, perhaps the children of the Lion-dancers. These were the children who made the festival exist, the kids carrying the tradition. But there were only so many of them. The rest were from all over the city, brought here to experience the purest of emotions, terror, and in doing so, perhaps plant the seed of distrust in their parents that would one day grow into full-fledged rebellion and drive them from their homes. After all, they weren’t part of any traditional dance, they were victims of the slaughter. City kids with videogames and ramen noodle shops and no roots to their past, save this one, the one that might drive them farther from tradition than their own terrified parents already are.
But I don’t think it will. 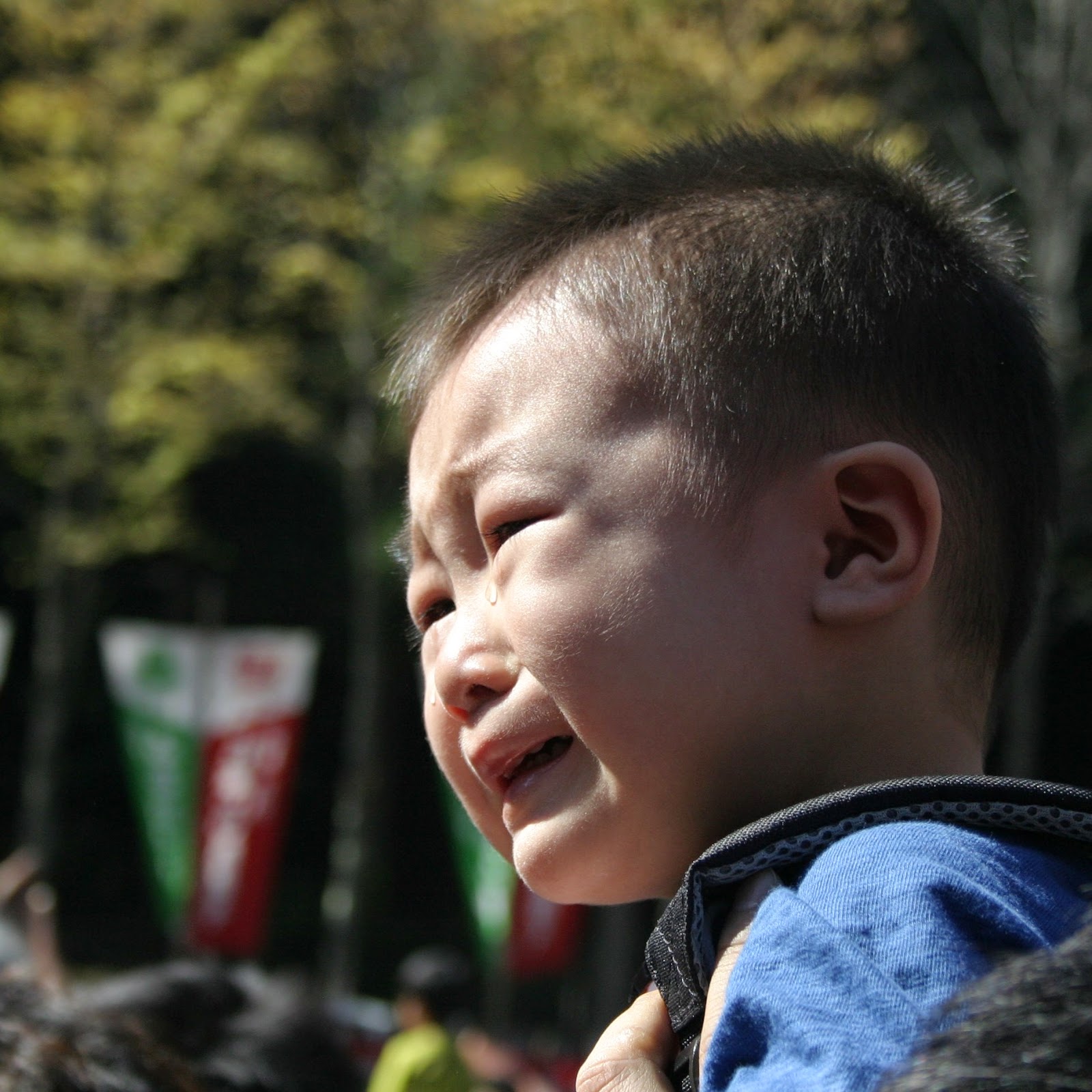 There’s something about terror that transcends culture; people the world over value fear. Be it the Brothers Grimm, Freddy Krueger or Lion-dancers, adults get a sick pleasure from traumatizing their children. Parents, camp counselors and big brothers the world over recognize this. Some part of us wants to be scared, that’s why we ask to hear ghost stories and to see scary movies. Fear awakens something in us, something primal, but perhaps it must be balanced by silly masks and obvious costumes, so we can still sleep at night in a house with the true masters or terror: our parents.
Joe Darris Mitchell lives in Takayama Japan with darling wife, and looks forward to carving pumpkins and handing out candy despite the lack of trick-or-treaters, damn it. Read more about a genius Japanese students, or other weird Japanese festivals. And please +1 if you liked this story!