The shrill trill of flutes, ancient yatai, and the greasy smell of festival food all competed for my attention. I had been looking forward to this festival since we arrived in Japan. 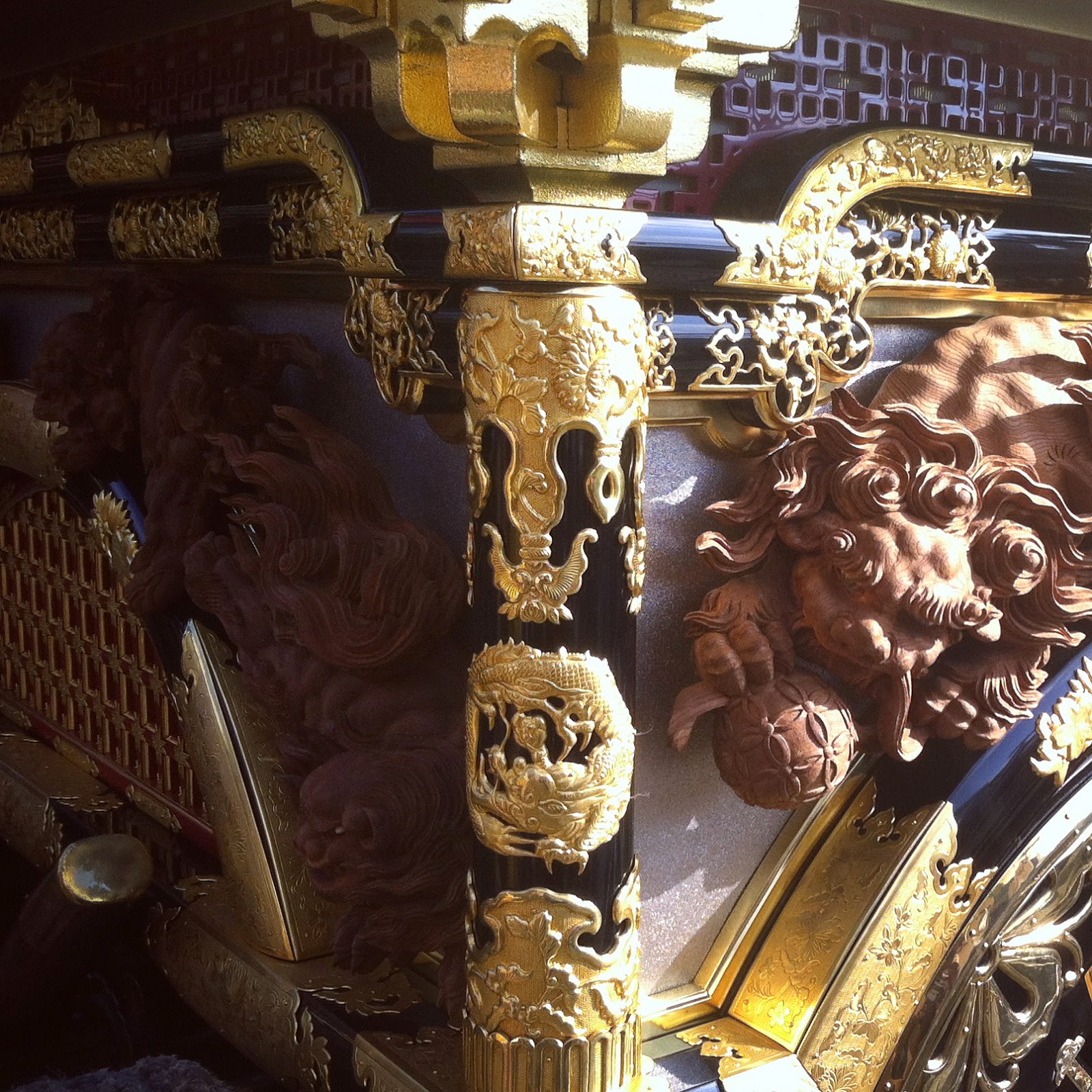 The story goes the emperor of Japan hired carpenters from Takayama to build his palace, as they were the best woodworkers in all of land. And though they built his beautiful home, they were still required to pay heavy taxes. Unhappy with this state-imposed robbery, the carpenters melted all of their money into gold leaf, traded their skill for silk, and made the most beautiful yatai in all of Japan.


And yet, something about the festival, like much of Japan, is an unspoken bond between the ancient and the modern, (another contradiction for my regular readers). In the states, there are no festivals like this, no ancient rituals to the gods. In the states, people crowd around to see musicians play guitar, while at the Fall Festival, they crowd around to see puppets. And when the puppet fails to swing out to the last rung of the monkey bars, a man in a hood carefully moves it, strings be damned, and the crowd giggles at this failure of ancient technology and snaps pictures on their cell phones. 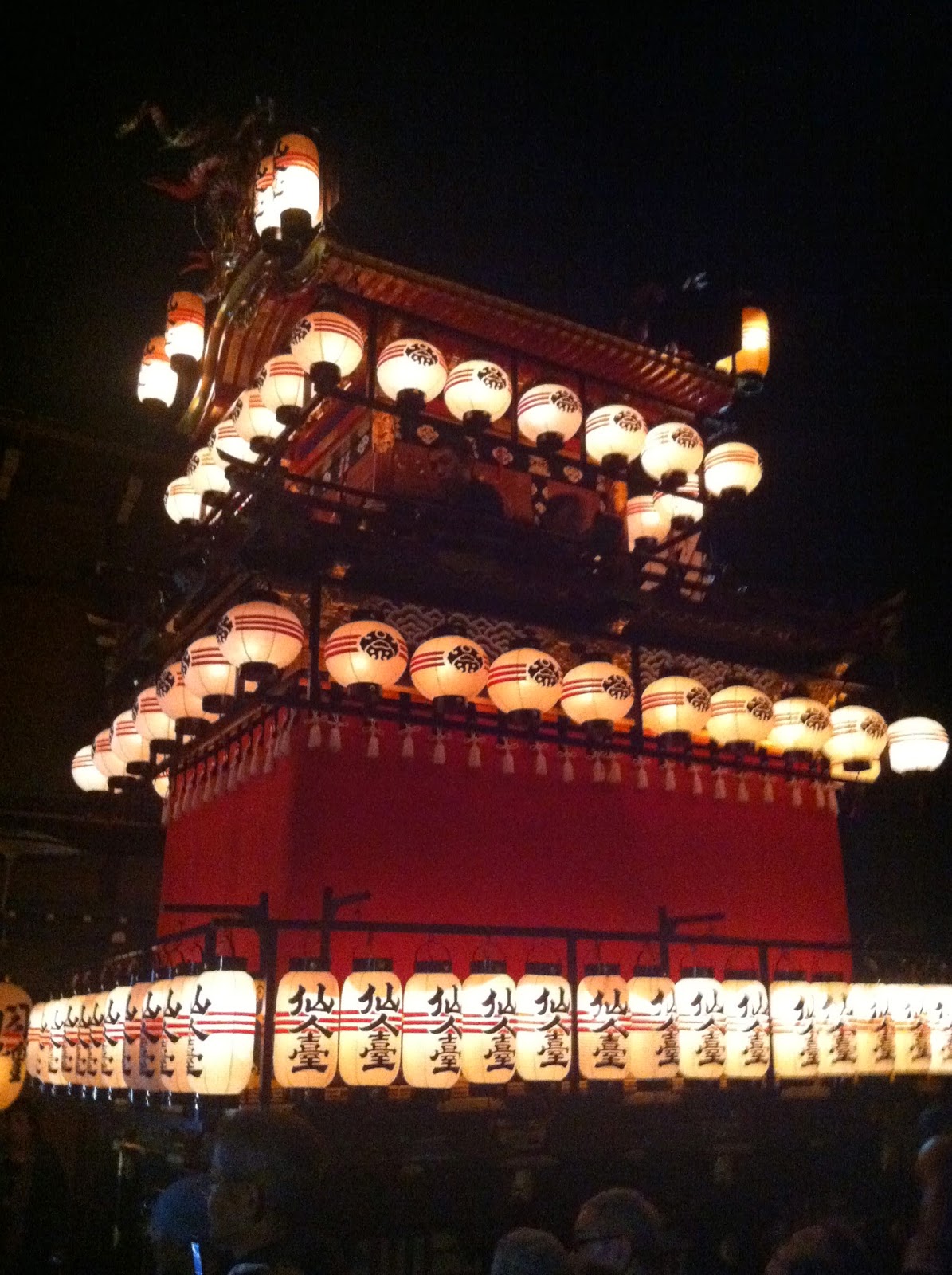 The old and the new blend together seamlessly in japan. Even the crowd seemed a mix of the centuries; there were tiny children and doting grandparents, uniformed teenagers daring each other to dip their toes in the river, Tokyo fashionistas in too-high heels, and Europeans crowding around the only gyro stand in all of Takayama. Though we were all there ostensibly for the yatai, I think that we, like people throughout the ages, truly enjoy festivals for the food.


This is what my students told me after all. “The best time to go is 10am.”


“That’s when the food stands open.”


The food was also part ancient tradition and part modern artifice. I, being the foolish foreigner that I am, headed straight for the enormous spiked sea snails an elderly man was grilling. Shocked that I wanted one of these horrifyingly large mollusks, he carefully picked a juicy one and handed it over with a tiny wooden spear for me to gore it with. I wandered off, cradling my meal and looking for my wife. I founder her grinning ear to ear as she held a big, round orange and sucked the juice from it. Drinking orange juice straight from the orange looks like something traditional, but it requires a specialized blender to liquefy the fruit’s insides and not damage the peel. The ancient and modern blended yet again. Eager to show her up with my far more bizarre festival fare, I speared my snail’s firm flesh and took a bite.


It was the most disgusting thing I have ever eaten. Ever. I am not one to be squeamish. I dine on all manner of sea creatures, from unagi to urchin. I’ve eaten cartilage, raw scallops and garden snails by the bucket. I once slaughtered a guinea fowl only to dine upon its heart and gizzards. So I think I’m more adventurous than some (certainly than my wife, who thinks a cucumber on a stick is the epitome of exciting food) but this sea snail was horrible. It was bitter, bitter as the smell of burnt matches. It was huge and impossible to tear apart with my teeth. I’ve had snails before, and always the intestines are removed, but not for this guy. As I gnawed at the snail’s flesh and attempted to force it down my throat, I saw centimeters of curled up blackness approach my mouth. It was too much. I spit it out, ashamed of my shortcomings, and begged my wife for a drink of orange juice.


I gave up on traditional food after that. I queued up with the Europeans for a gyro, bought a bag of tiny pastries that are somewhere between a baked donut and a funnel cake, and a skewer of delicious hida beef. The gyro was strange, the sweets gave me a bellyache, but the hida beef… oh yes. Hida beef is richer than the emperor. Hida beef is succulent rivers of fat between tiny islands of muscle. If hida beef is the solar system, the planets are the meat, and the enormous space in between is grass fed, pampered perfection. Satiated, we went off in search of the parade.


The parade is a fantastic blend of the ancient and the modern. Around a dozen men haul each yatai down narrow Japanese streets. People lined up, eager to see this procession. One man screamed at the rest to get out of the way while a bumbling police officer continued to let cars drive towards the approaching yatai. 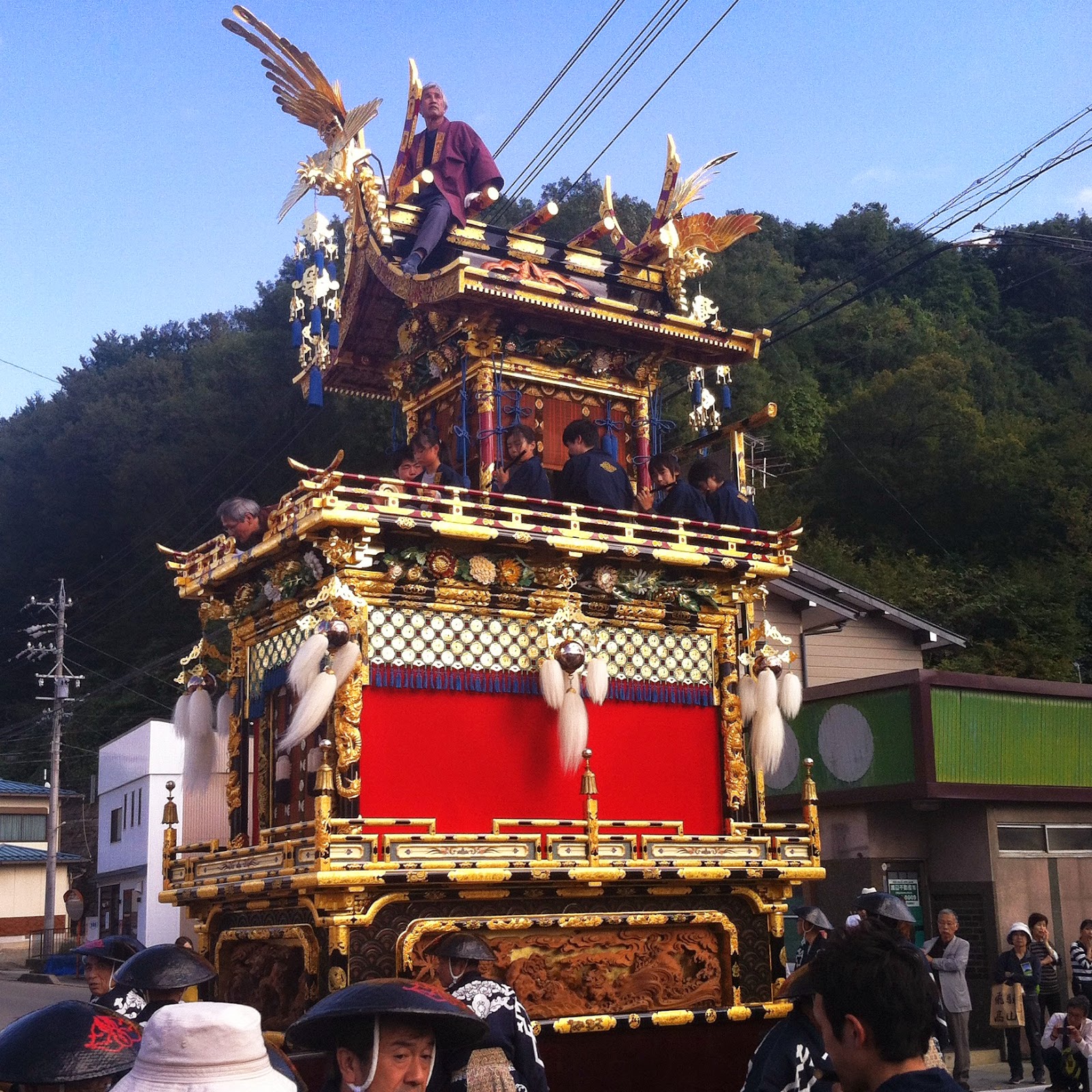 Some of the elaborate floats have children perched atop them, some venerated members of the community, but the tallest float had the greatest rider. He perched atop the very tip of the yatai, and did not come down, not even when they tilted the entire structure back on two wheels so they could maneuver it around a corner. He carried a pronged stick, and used it to prevent electrical wires from snagging on elaborate gold sculptures or electrocuting anybody. His presence, more than anything else at the festival, made me appreciate the blend of the ancient and modern. This route has changed little over the years. And yet the festival evolves. It has too. Water damage and theft might have once been the greatest threat to the gods within the floats, but now
this man must ride the yatai to prevent death by electric wire.


And the festival participants take all this in stride. There is no contradiction between the old and the new, no need to silence your cellphone in the presence of the divine. There’s a coexistence between the ancient and the modern here that is as puzzling as it is refreshing. I can see a seven eleven from the temple near my home. Apartment buildings fight rice paddies for space; neither is willing to move, and neither has to. Instead both ways of thought, tradition and progress, grudgingly accept each other and force each other to evolve.


It’s strange and a little unsettling, but it’s beautiful and makes for better festival food than sea snail.
Joe Darris Mitchell lives in Takayama Japan with his darling wife. If you enjoyed this story, why not drunkenly tell your friend about it at the bar, or hit the +1 button?

Read more about Festivals, food, or fun in Japan.